Absolutely outstanding food, and service!!! Server was very knowledgeable about gluten free prep regarding celiac management. We will definitely return. Do yourselves a favor and go!

Unfortunately this pizza can not be considered safe for Celiacs. I ordered gluten free pizzas but when I got home and tested one of them with NIMA meter it came back as containing gluten. I thought perhaps they had just given me the wrong pizzas so I called them to double check and explained them the situation. Brandon at the bar insisted they were gluten free and that it was just ‘the flour in the air’ that may have cross contaminated it. I am merely gluten intolerant so I tried a slice and of course had a reaction 30 min later. Wouldn’t risk it with my children who are true Celiacs. Wasted money and wasted dinner.

My husband and I split the GF pizza, and the other members of our party were splitting two normal pizzas. When they brought them out, the waitress was carrying two pizzas in one arm—my GF one UNDER a regular one. Another waitress carried one of the regular pizzas by itself—it would have been so easy for one to carry just mine and not try to carry both. I was somewhat concerned, but we were with family and I didn’t want to make a scene. My husband ate the side that had been closest to the other pizza. Within 20 minutes I was having intense abdominal pain, and headed to the restroom. It is a single stall and there was someone ahead of me. I ended up running out the front of the store and to Pier One next door. This is one of the most violent gluten reactions I have ever had—like food poisoning, but my husband ate the same thing I did and was completely fine. I am shocked because their reviews on here are fantastic, so maybe it was just an off night, but I am still very sick. Their food handling practices fell far short of what I would normally expect to see in an establishment rated so highly on here. 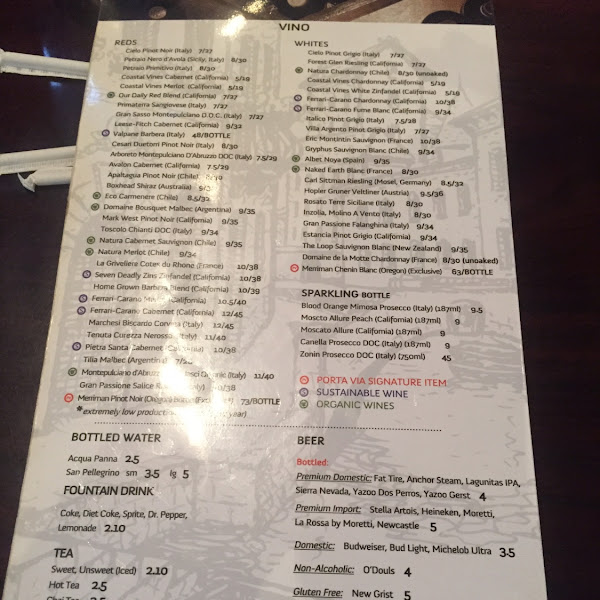 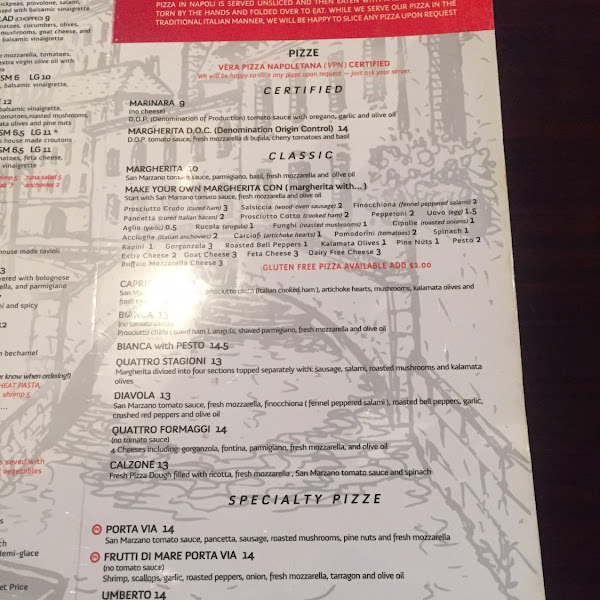 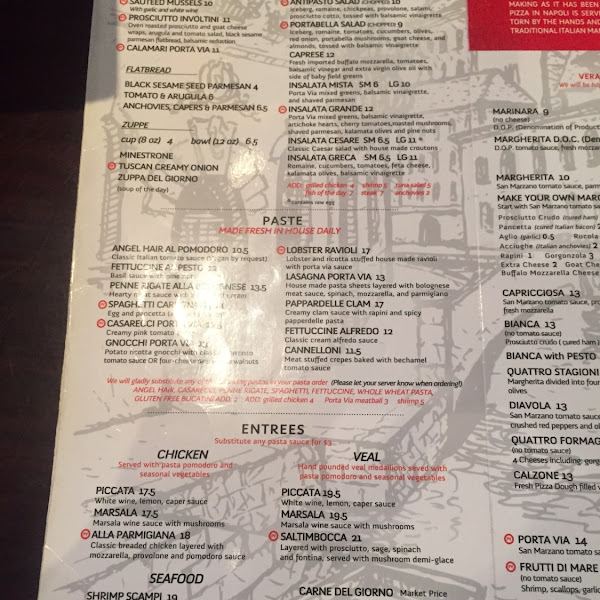 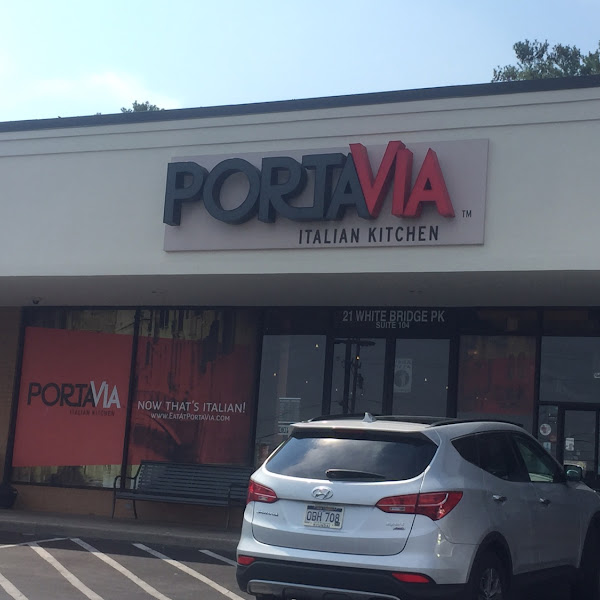 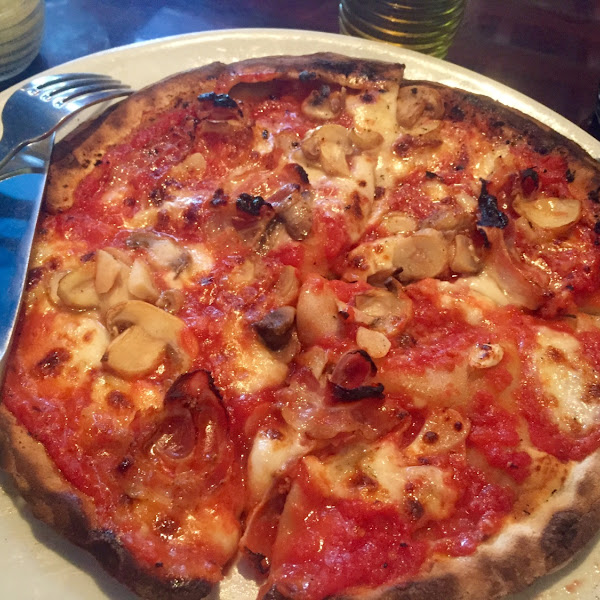 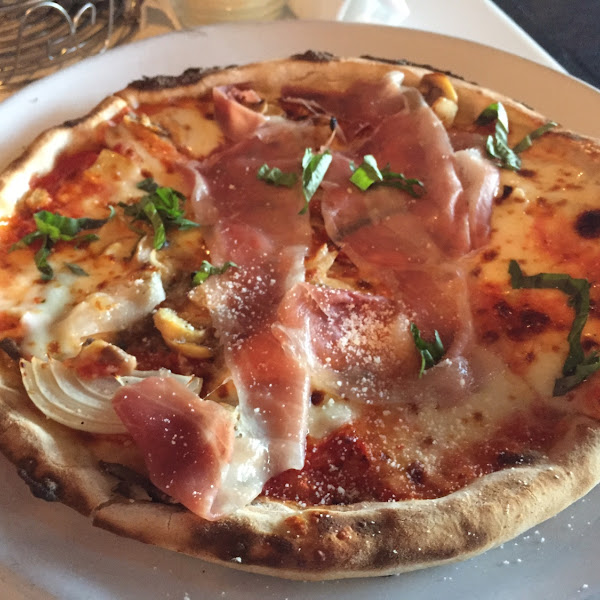 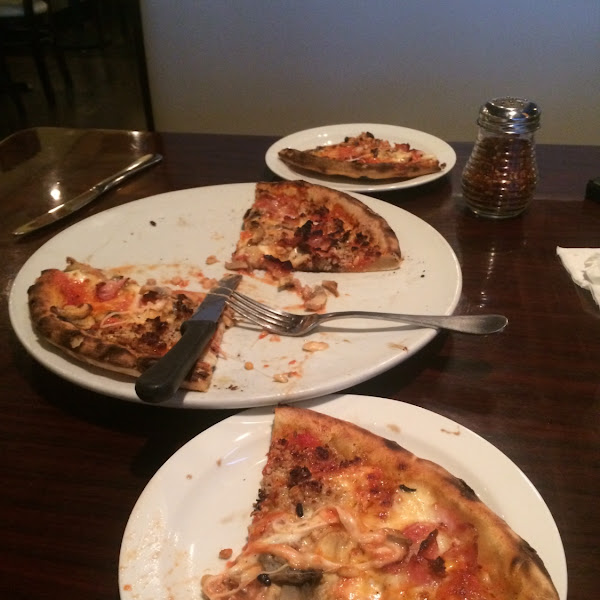 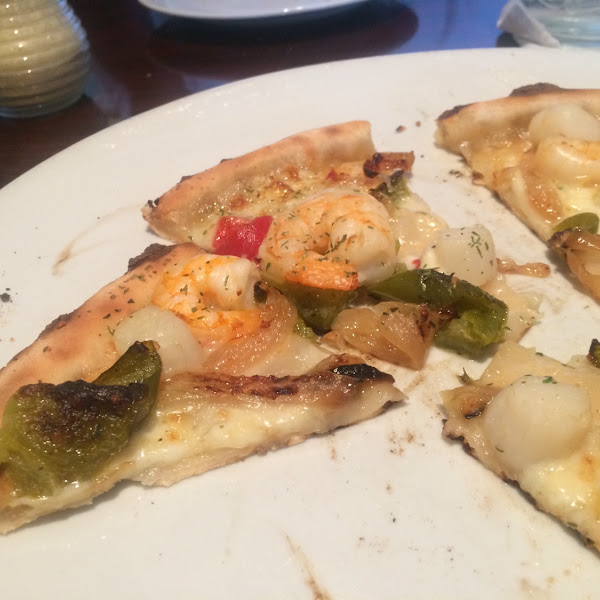 Knowledgeable staff. They have gf pasta and pizza. Pizza has a separate prep area to help avoid cross contamination. All sauces were gf per the waitress. I had pasta and red sauce. I’ll be back.

The gluten free pizza here is delicious! They use only best, and freshest ingredients. Have been many many times and it’s consistent!

The staff was very helpful and nice about talking GF, and answered any and all of my questions. They make their pasta in house and use a GF flour to make the GF pasta per request. It was super delicious and very filling. However was disappointed to find out the Gelato was not GF, but appreciated their honesty about the cross contamination with it.

Best gluten-free pizza I’ve ever had. I also have a cow-dairy sensitivity and they offer goat cheese as a topping. Really excellent pizza.

I would definitely be more apt to be a regular visitor if I was ONLY gluten intolerant..... The pizza was very good but it did leave me bloated and feeling kind of icky. Cross contamination isn't mastered here, but it is a good atmosphere and friendly, so if you're not celiac, I would recommend.

Maybe the best gluten free pizza I've ever had. Every time I've ordered it I have to ask and make sure it's gluten free because it honestly is unbelievable.

Best GF pizza crust ever! It's chewy like regular crust--well worth the wait

Omg!!!!!!! The pizza is to die for! It tastes like what I remember good pizza used to taste like! Even my husband was like "wow! That tastes like real pizza!" Haha! Note though: if you are going for pizza its best to hit them up for lunch or early dinner; they make their crust in house and they run out often at dinner. The server said that pretty normal. When we went at 530 on Sat their was only 3 left! So worth the trip! They also have gf pasta!

They have great options if they don't run out. ordered a GF pizza and they ran out of GF crust. The pasta was just ok the sauce was very bland. Especially when you have your heart set on a GF pizza.

The kale salad was great.

Bueno! Bella, mercy me, that's a good pizza. A bit pricey, but excellent. I have had the Umberto and the Porta Via pizzas. The former is my favorite. The Insalada Grand is simply marvelous, just wonderful, even if you're more of the meat and potatoes kind of persuasion. I haven't ventured deeper into the menu, sorry. Maybe next time?

I ate here two different times. The pizza was amazing. Literally the best gf pizza I have had anywhere. The pasta and meat sauce was pretty good.

The food was amazing. Best gluten free pizza I have ever had. They actually make their own gluten free pasta. Was there twice while in town and the staff was knowledgable and accommodating. I went in for lunch and wanted a dinner entry. They actually got the head chef on the phone and made sure the present cook knew how to prepare the dish properly!

Delicious. Very sensitive and no reaction. Had the 4 cheese pizza and it was amazing. They cook it in a separate pan and understand cross contamination

Gluten free pasta with pesto ia yummy!! I will definitely be going back.

I had the margherita pizza. The crust was tasty, although a bit chewy. The toppings were fresh, but sparse. I will definitely go back, and ask for more generous toppings. So glad to find this place just around the corner.

Delicious GF pasta and pizza. Can order GF type of flatbread with as a starter to replace regular bread but no GF rolls. Staff is helpful and the GF gelato is delicious too! One of our "go to" GF places.

Amazing gluten free pizza! Best I've had since being diagnosed. My waiter didn't know anything about gluten free rolls, but the manager said gluten free beers and cider are in the restaurant's future! Would definitely recommend and go again soon!

Excellent GF pizza--best I've had! They also have a menu option of pizza with no cheese (I'm dairy intolerant too). Plus mint gelato made with soy milk! Definitely on my go to list when in Nashville!

I've eaten here several times and loved it each time. Fabulous pizza and pasta!!! Appreciate the effort on the gf rolls. Maybe make them a bit smaller or flatter. Either way I highly recommend Porta Via!