I got incredibly sick here a few years ago. I was with family from out of town. I asked all the right questions. They told me they understood it was a severe allergy and would take precautions with separate pans and utensils for my omelette. Within 30 minutes I was sick. I was very violently ill for 3 days. When my mom called the restaurant to complain the manager said they must have been very busy and someone made a mistake in the kitchen, using the same utensils. They offered me a free meal. Nope. Never going back. You can’t make a mistake with celiac.

They want to help but cross contamination seems highly likely. On the phone they seemed to be “gluten free” but upon arrival the miscommunication became clear. This is a gluten friendly place. Not gluten free. 3 starts for heart and effort. Minus two for major safety concerns. Beware of the soy as well 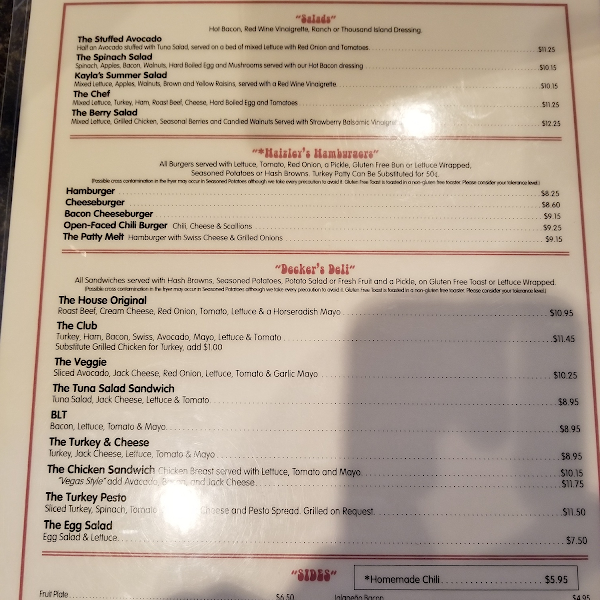 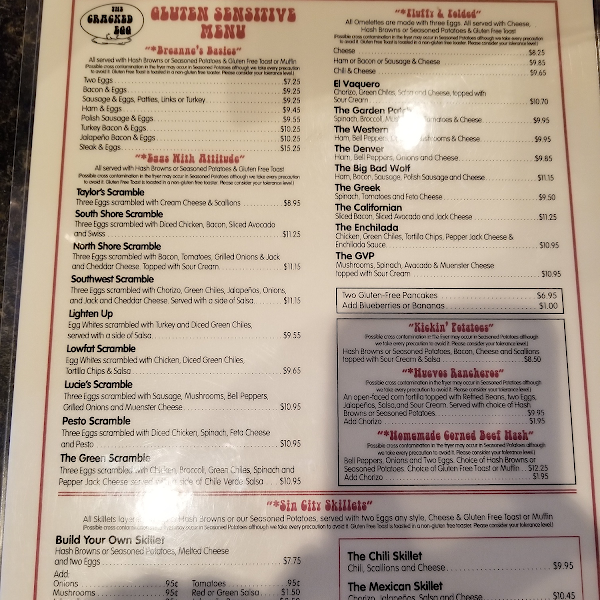 One of my favorite breakfast places. Their gluten-free pancakes are amazing and they do have GF toast. Cross contamination could be an issue for some people, but I have not gotten sick here.

Not gluten friendly and definitely not for anyone with Celiacs. The server was honest and told me not to order anything other than a GF muffin which came to them sealed. It was not very good and was put in the microwave way too long. They use the same grill and prep areas for gluten food as they do for gluten free. They share utensils, will not use clean ones and would not scramble eggs in a clean pan for me even though I am severely allergic. They refused and said I should only order the crappy muffin to be safe. She said even the salads are cross contaminated. Her sister and her mom have Celiacs and cannot eat there. Stay away from this place. I would give 0 stars if I could.

They have a gluten sensitive menu with many choices. I chose the gluten free blueberry muffin with my breakfast since their toaster is shared with gluten bread.

Not quite sure of the negative reviews because me and my family went there and had probably one of the best breakfasts ever. I'm not kiddin, we really enjoyed it so much that we are planning on going back before we leave town. The kids are asking to go back.

Our waiter seemed very helpful and I was excited about the gluten free options. I was very sick within a few short minutes. Obviously they don't know what gluten free means and their staff need to be trained. I'm afraid to eat here again. I won't be back.

Went here when visiting family. Chose this restaurant specifically because it said they have a gluten free menu. There was a special menu but other than having an omelet everything else didn't seem safe. I explained to the waitress that I had celiac and all I wanted was an omelet as the hash browns and toast were not safe for me to eat. When my food came out it had hash browns on half of my plate. I was out with family and was annoyed and slightly embarrassed that I would have to send my food back (and the waitress was not friendly) so I ate the portion of the eggs that were not touching the hash browns. Still got sick. :( it wasn't even busy in the restaurant when we went for brunch. I won't be returning.

Went to the Henderson location. Terrible!! Here is a thought. When stating you can do gluten free and that you kitchen staff has been trained on it try starting with clean tables and silverware and plates. My kids had an omelet with cheese and bacon and opted out of the hash-browns for fruit. The youngest was sick with in 15 min. In the restaurants defense someone reported it wrong and the menu is NOT gluten free but sensitive. No different then the dominos menu that states NOT okay for Celiac Disease. I have contacted the site to have that changed!! On the food end of it, I ordered off the regular menu and it really was nothing to write home about so there will be no point in stopping there again.

Great service very understanding of my needs and the food was great!!

Great breakfast! They have a gluten friendly menu and happily substituted the regular pancake for a gf pancake for my kids. Very large portions and excellent service!

Had GF blueberry pancakes, eggs and bacon. They were yummy. I'm not celiac, but VERY intolerant of gluten (my home is GF COMPLETELY). I didn't get sick here. It was very nice to get breakfast that wasn't EGGS.😉

Full menu with gf bread for sandwiches and breakfast items. The menu I saw said they use a separate toaster, but check with your server to be sure.

Saw that this chain had good ratings for Gluten-free eats so I thought I'd give it a try. I heard good reviews about the gluten-free pancakes. When the waitress came over to take our order, she warned me that the GF pancakes were cooked on the same cook top as the gluten-filled pancakes and that I better know my tolerance level, the GF menu also mentioned that they have GF toast but it was toasted in the gluten-filled toaster. I ordered a skillet with scrambled eggs, hash browns, cheese, and bacon with untoasted GF bread. The waitress asked if I wanted the bread warmed in the microwave instead. The bread was served hot in a plastic pouch. Skillet was good, GF with no ill effects, but it was nothing special. I appreciate that the waitress was straight and told me the truth.

Definitely NOT celiac friendly...they have a “gluten sensitive” menu AND they make sure to say that they “do NOT have gluten free items due to possible cross contamination.” We ordered the gf blueberry pancakes, huevos rancheros, and a breakfast skillet off of the gluten sensitive menu. Also, we did NOT get the gf toast since the menu said it is toasted in the same toaster as other bread. However, just before the end of our meal, my husband was in their bathroom with “Black Death”...liquified guts coming out both ends. 🤮 This experience of eating at this restaurant has ruined our day since we now need to stay very close to a bathroom. CELIACS BEWARE!

The breakfast here was INCREDIBLE. They have a gluten friendly menu and do their best to prevent cross-contamination. Their toast is toasted in a shared toaster though. I had the GVP omelette with hash browns, and it came with the choice of GF toast or GF chocolate or blueberry muffin. I went with the GF blueberry muffin and was phenomenal. The coffee was delicious. My boyfriend and I split the GF pancakes and they were out of this world. I was incredibly impressed. Well worth the 15 minute drive from the strip and the 20 minute Sunday morning brunch time wait. I’ll definitely be back. Plus, they’re running a special right now where if you download their app, you save 20% on your check.

I had gluten free pancakes and they were pretty good! Not the best I’ve had but better than nothing! The wait staff knew gluten free options and were friendly and patient with my questions. My only problem was that I had to look up a “gluten sensitive” menu online, none of the gluten free options were listed on the actual menu.

Great find today! Have a gluten free menu. Just let them know you are very sensitive and they will rake care of you. I will be back.