My wife is celiac and we came here after reading some positive reviews regarding the gluten free options. We got the duck poutine and a couple of omission lagers. The food was wonderful and safe for my wife, we had a great time.

The gluten free bonanza was so perfect I forgot to take pictures. Let’s just say they had us at gluten free fryer and gluten free bread. Yes we could actually order the mussels with bread and dip it in the amazing spicy sauce (if you are celiac you get the excitement). The kids ate gf burgers with buns (their bread is super soft and yummy) and fries and were so happy. The shrimp tacos were not gf but mom loved them. Salads and Cocktails were lovely too. They have cider too. We were told the owner’s kids have allergies so they take it very seriously- it showed.

I went for lunch when I first arrived to Newport and had a Gluten free pizza and salad. Both were absolutely delicious and I didn’t get sick. We loved it so much we decided to get it for take out and eat it back in our hotel room. I had ordered the burger and informed them that I had celiac and clarified it was a severe gluten allergy incase they weren’t sure. The man i was speaking with assured me it would be all set. We went to pick it up i did a quick look and on the box they wrote gluten allergy so i felt pretty safe, when getting to the hotel i realized there was onion rings on the burger..I thought there was no way they would give me a gf bun but put non gf onion rings on the burger but i called to be sure. And sure enough the man i spoke to said let me check with the kitchen and he came back and said “unfortunately the onion rings are not gluten free but the bun is so you should be good with that” I simply said okay and hung up. A few minutes later we decided to call back and see if it was possible to have a refund if not no big deal. They took our name and number and address so the owner could call us later and they refunded the burger . A couple days later the owner did call and apologize many many times. He was very sorry that happened and said he’s going to send a gift card in the mail in the hopes we come back, he refunded the whole bill and he also said he’s going to have a kitchen meeting. The reason after all the happened i’m still giving 5 stars is because i appreciate the owners taking responsibility and righting their wrongs. From this mistake now the kitchen will be informed on gluten allergy. 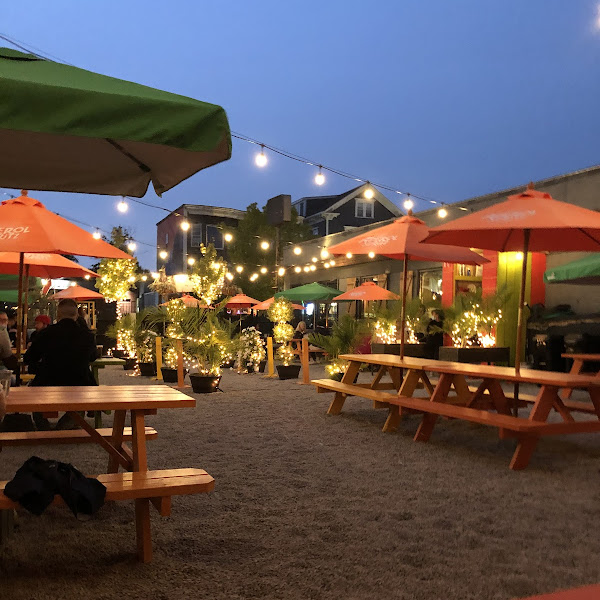 One of the best pizzas I have ever had. Helpful staff. Also the Duck Poutin was so good I had to fight the rest of my party off.

Almost everything on the menu can be made gluten free.

Regular menu includes items for gluten free preparation. The BEST tasting gluten free pizza (even gluten lovers like it)! Kitchen staff seem very knowledgeable about celiac and even pointed out that they could swap the blue cheese with another cheese (since blue cheese often made with wheat rennet - which I had not known at the time) Great food and great ambience! One of my top favorite restaraunts in Newport!