Went here with my boyfriend and got the gf pizza-hands down one of the best gf pizzas I’ve had. Actually had thick crust and good consistency. I’ve gone to UNOs before and the pizza was okay, but never this good. Waiter said they just got a new crust. Also made completely separately.

Gf pizza had really good crust but overall not impressive.

By far the best gf pizza I’ve ever had. Dough is freshly made at the restaurant. Waiter was very knowledgeable, and kitchen is completely separate. It was so easy! Tested it with my Nima (gluten tester) which said it was gf. Service was fast and great too! 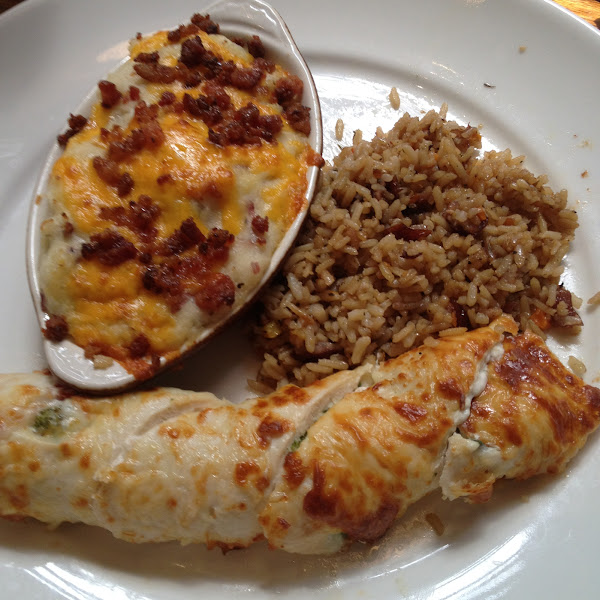 This had to be in my top 5 best pizza I've had since going gluten free. I travel around the country and even have had my fair share in gluten free pizza in Italy and man was I impressed. This isn't your typical card board disk. It's actually has some chew to it at just the right amount. It's even got a real crust. The only suggestion I make for you super sensitive Celiac out there like me. Is to request they grab the toppings including the cheese and sauce from the cooler and not the line. They do keep the crust in a sealed container away from everything else. With this method you can make most pizza places within reach. Just make sure you speak to a manager before sitting down so you can make sure it will be done correctly.

This was one of the best GF pizza’s I’ve had. And, it ended up being free since they dropped first one. Also, they are one of the few restaurants I’ve found that has GF beer. Beer and pizza for Celiacs is rare.

The gluten free pizza is frozen and bought at an outside vendor. Only 2 burgers to choose from. Not a large menu to pick from

Amazing service and amazing food! We have a dairy-free, soy-free, gluten conscious toddler. They were willing to review the menu for all allergens and custom prepare an entree for her (baked salmon, olive oil sautéed vegetables). Top notch service! Surprised they don't have gluten-free pasta...

Had a delicious dinner. Decent GF menu with enough options. Waitress was knowledgeable about celiac and took my requests seriously.

They have a gluten free menu, including Udi's GF buns for burgers and a number of options. Server said they have separate kitchen areas and GF foods delivered separately.

Even had gluten -free beer. Separate gf menu. Outside seating overlooking the harbor.

Awesome pizza. Server pointed out that grilled chicken could be contaminated based on how they prepare it. They were very familiar with menu and options.

I ordered the Uno burger. It was very good. The bread was tasted like normal bread would. Also the waitress was very knowledgeable about what i was able to eat.

My daughter and I are both celiacs, so we ordered the pizzas off of the gluten-free menu. The waiter wrote GLUTEN FREE in big letters on his notepad. The pizzas were tasty but were dusted with what looked like flour. Over the next couple of hours and then that night, it was clear that we both had consumed gluten. The only thing we'd eaten that day that could have had gluten was the pizzas at Uno. Uno did serve RedBridge beer (one of my favorites), so though I give them a celiac friendly vote of no, they are trying. I think the kitchen maybe isn't as committed to separating gluten from gluten-free products as it should be.

Pizza was good says the teenager and I had the Baked Stuffed Chicken and it was so yummy !!!

We were looking for places on the UWS for good GF Pizza and this was so far the best! Couldn’t tell the difference to a regular pizza!

crust was my favorite so far and the pizza was super good. it came on separate plate instead of the black pans. very good

Tried this place for the first time after seeing reviews here and the pizza was prepared safely and tasted great. No issues for us with Celiac. (Also, they will bring your order out to the car if you wish.)