They have a VERY thorough allergy menu of the top 8 allergens if you ask your server. I’ve eaten here a half a dozen times and have never gotten sick. My favorite thing is the potato skins, one of the only places I’ve found I can eat them. They have grilled chicken strips several time and there are roughly a dozen sauces to choose from that are safe. (Only ones that’s aren’t are the Asian flavors that are never safe.)

They claim they have a gluten free menu but it's not a menu. It's more like a document that says they offer many gluten-free items. But in-fact, they really don't because there are a lot of disclaimers, like ""All of our sauces are made in house and are gluten free. Just to be safe, stay away from the Teriyaki, Caroline Gold, and Sweet Thai Chili sauces though. They contain a packaged ingredient that may or may not contain gluten". Then, in another spot, it says "our dressings should all be free of gluten. To be safe, stay away from the Ranch Dressing. It may have a gluten additive". It also suggests one can order "Naked Wings" but immediately afterwards says they are cooked in the same oil as gluten-containing menu items. So, really, there is nothing they can assure you is gluten-free.

Worse, my waitress was clueless. OK, I understand not everyone can be up to speed on what is gluten-free so I asked her to check with the manager. I was told I could get a salad but they would hold the cheese for me and would not put any oil on it. Really??? Clearly, neither she nor her manager had a clue. So when the salad came, it had no cheese but a good dose of croutons.

I also ordered a grilled chicken breast. While it was quite tasty, it had some seasoning on it that I have no idea what it was....nor did the waitress.

There were no sides (according to my waitress) that were gluten-free so it was a pretty boring meal.

My advice is if you need to be Gluten-free, avoid Roosters.

They have a gluten free menu. Can get naked wings, several choices of sauces. They have about 3 gluten free salad dressings. Can also get some sandwiches. May not be safe for celiacs, due to cross contamination. 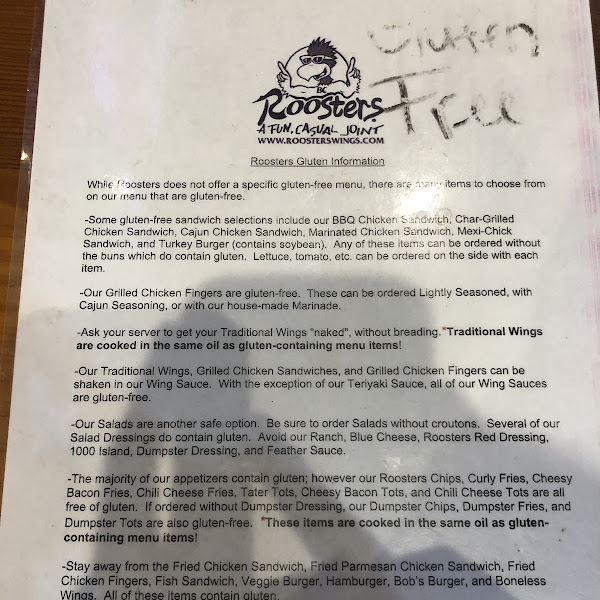