11 ratings
Reported NOT to have a gluten-free menu, but gluten-free options are available.
Reported GF menu options: Appetizers
cottonpatch.com

Not GF friendly at all! Staff is clueless.

This place may have been good for GF years ago, but there’s very little now GF. Just salads basically. The servers know nothing about GF. They gave me a Soy free menu instead. Ugh

Because I have celiac disease and was on a road trip when we stopped at Cotton Patch Cafe, it was very important that I had a meal that I wouldn't regret the next day. We found the restaurant using the findmeglutenfree app and called ahead to make sure they still had a GF menu; they did, and we asked for it specifically when we arrived.

Our server was not well-educated about the gluten free diet, but she made sure the kitchen staff knew it was imperative that my meal be GF. When my food arrived, it was obvious that the kitchen staff was well-versed and knew how to prepare a safe GF meal.

The tilapia was seasoned and cooked perfectly. Though the vegetables were not seasoned, they were steamed just until tender, which is how I like them. I put a little butter on them, and they were quite nice. It was a delicious meal that I felt safe in eating. Even better, I had absolutely no adverse reactions to it the next day.

Their gluten free menu is wrong. They have Mac and cheese marked gluten free and it is not. I had already eaten some when a different waitress who was more knowledgeable warned me.

Went for lunch. Waiter was willing to check on all options for me and they substituted for items I couldn't eat. Very friendly and knowledgeable.

The manager went out his way to go over possible options for me to eat as I am GF and dairy free. I am not celiac but try to watch cross contamination closely. I’m not sure if this place is 100% safe for someone with celiac? The manager did however try to be accommodating and avoid cross contamination.

The staff was amazing. I told them I had an allergy and the went and scrubbed down the grill before cooking my food. The gluten free menu is not huge, but what they do have is delicious.

Staff has no clue what gluten is. Cross contamination is to be expected here

I love Cotton Patch but not this location! I have been to this location many times but apparently they have different management. I asked for the gluten free menu and I noticed some dishes had an “*” beside the them but there was no comments on the page stating why. The waiter didn’t know why so, I asked for the manager. The manager said that’s how they get it from corporate and had no idea why they were there. Since I’ve eaten there so many times over the years, I knew the dish had something that I needed to substitute to make it gluten free. The manager wasn’t concerned and apparently didn’t intend to fix the problem. I’m concerned about eating at this location if the manager isn’t trained or concerned about food allergies. I don’t know how he could be training and supervising the employees at the restaurant about them.

Very limited selection salads or grilled fish/chicken was the options.

GF menu available. They do not have dedicated GF area, so cc is a risk just like most restaurants. Though we did not have any issues. Food was good servers were knowledgeable.

Awesome staff and manager. They accidently put a salmon on a rice bed with gluten but the manager caught it, knew they couldn't just scrape the rice off, and grilled a new salmon.

No way if you are celiac. All they have it’s gluten free bun

Well seasoned. Lots of options for the sides.

You have to ask for the dietary or gluten free menu.

I had the ribs and shrimp and it was very good. I have Celiac and didn’t have any issues.

Stopped here on our way home from Texas. While my daughter enjoyed hers, I ended up in the ER with Food Poisoning from the Fish Tacos.

There is a limited GF menu you can ask to see. The wait staff is not trained. I was asked if I wanted croutons in the salad and banana pudding for dessert.

Not really any exciting GF options. You really feel like you're missing out eating your grilled chicken or salad while others at the table are eating rolls and deep fried everything. Can't even have chips and salsa, the chips had chunks of fried batter mixed in for some reason. They obviously don't know anything about cross contamination.

They don't have a gluten free menu but you can view the allergen information on their website and they have a printout of it. My steak was overcooked but it was seasoned well.

I was concerned about eating here given, but they were very accommodating and the waiter took it very seriously. I did not get sick!

Ask for GF menu. However they can make burgers without buns.

I've always had great customer service here and even though their gluten free menu is limited it is not as limited as olive garden and what they do have is really good. also they are on the cheaper side

I would not be going back to the Cotton Patch again. They do not have a very big GF selection. What they do have is way over priced and not very good. The strawberry salad had rotten greens in it.

the Cobb salad is good. I usually get the avocado bacon cheeseburger without the bun and substitute the fries for a baked potato. they don't have gf bun but there is plenty of food without it. they have a gf menu and if you ask for a manager they will accommodate your gf needs.

The customer service is exceptional. The employees were very helpful with the gluten free menu.

Cross Contamination was present, they tried to accommodate but were not very knowledgeable.

They have a good selection of grilled meats available but not much else to offer celiac sufferers. I had a loaded baked potato and it was delicious. Not very special in terms of gluten free options.

good food, they work with you. knowledgeable staff.

Gf menu if you ask. Good choices of fish and chicken with several sides.

Good food, but not certified.

Large selection of gluten free items. Their steak is awesome!

They had a GF menu, but the waitress was very unaware. She even asked me if I wanted rolls! Ha! That said, I didn't get glutened, and would eat here again.

a whole booklet lists everything from drinks to entrees 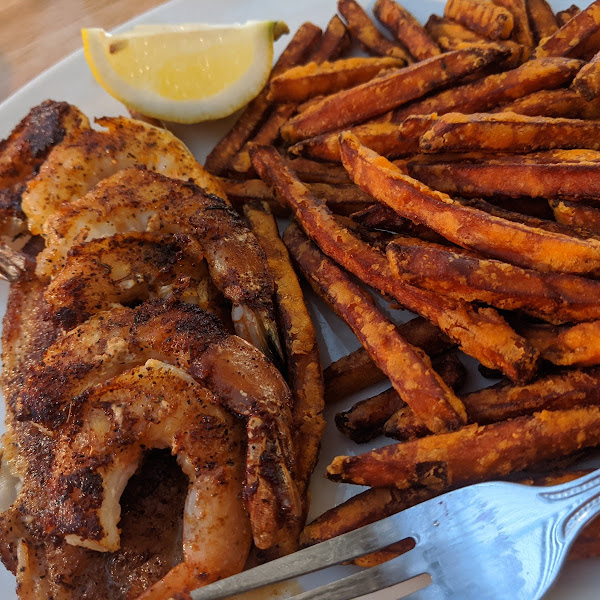