I called to ask about gluten free options but was told that we just have gluten frozen pizza crust. Not very encouraging.

The pizza is very good and have a separate menu. The GF brownie isn’t made in house, but still good.

Had a brownie for dessert. 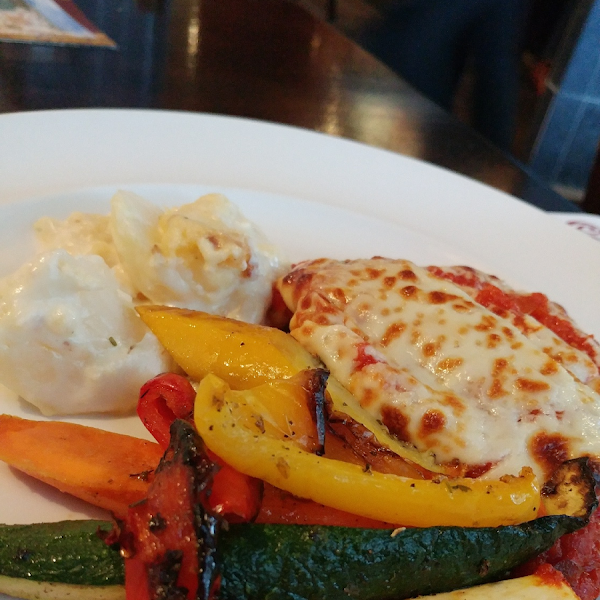 Great food and celiac safe. There is a gluten free menu and many of the things on the regular menu can be made gluten free. We had questions about certain items. The owner actually came out to answer our questions and was very knowledgeable.

Staff is knowledgeable & friendly. We have eaten here several times with no issue for my celiac daughter!

The staff isnt very friendly. But I got a safe and yummy meal and that's all that matters! Grilled chicken parm with veggies. The red sauce is delicious.

Awesome food! We eat here all the time and never had an issue. I’m celiac and super sensitive!

This place is great. Very knowledgeable, and the food is great. Its one of the few places i trust to eat at, and I've never gotten sick.

They are so good about gluten free! I have celiac and am very sensitive when it comes to cross contamination! I go there all the time and have never gotten sick! Highly recommend!

My husband takes me to Carlucci's when he wants a date night. Food is usually very good. Tender GF pasta. Could use GF salad dressing options.

I have celiac disease and follow a strict GF diet. So, I called this restaurant a couple weeks before going to make sure their gluten free menu was actually gluten free and to make sure they had a separate prep space and there was no threat of cross contamination. The woman I spoke with was very knowledgeable and assured me they took it seriously. While dining there, I asked again about the separate prep space and made sure there was no chance of cross contamination. The server’s response was, “Yes, it’s gluten free.” The meal itself was delicious; however, shortly after my meal, I became very sick. I called the next day simply to let them know what happened because I didn’t want it to happen to someone else. The manager apologized and said that, unfortunately, not all of the staff are as careful/knowledgeable as he is when prepping GF meals. I never ever post negative reviews, but I do not want someone to think it’s a safe place to eat and have the same experience I did.

This was amazing! Food tasted sooo good and the menu was very broad for gluten free! I cannot wait to go back here!

So many gluten free options! Got the Chicken Saporito with gluten free pasta and it was DELICIOUS! Perfect size portion and the sauce was so creamy yet so light. Our waitress was so helpful and understood exactly what I needed. Even offered gluten free bread with or without garlic and oil!

I love this place ...do make your needs clear and they will take care of you