I really liked this restaurant. They have a GLUTEN FREE MENU, the service is excellent, the ambience is great, our waiter was most helpful. Food was made to perfection. Definitely coming back next time in Birmingham.

The staff I very knowledgeable. They have a great menu. I seek them out since I have never gotten sick. They have more variety than most. Love this place and this restaurant in other locations as well.

SO excited that they offer not only a Gluten Free menu but also a Dairy Free menu. I had the rainbow trout and it was delicious! The heritage carrots were a different twist to a boring vegetable. Yummy! This is an upscale, pricey restaurant but definitely worth it for a special occasion! 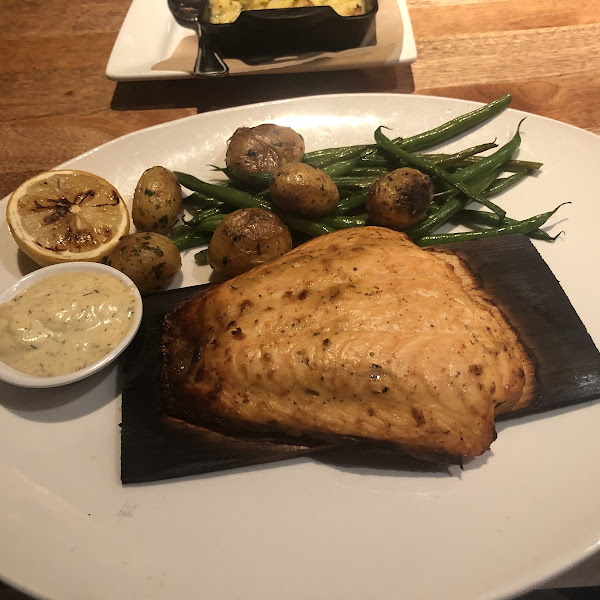 I have not been diagnosed very long so this hasn't been as easy time for me. For thanksgiving this year I just didn't feel up to cooking so my fiancé and I went to seasons 52 to dinner. I have read a lot about my condition and know that some restaurants leave a lot to be desired when it comes to eating GF so this was our first time venturing out since my diagnosis. First of all we were immediately pleased. The atmosphere was splendid. The wait staff friendly and actually knowledgeable about GF! I couldn't believe it. Prior to retrieving the GF menu (which was NOT a xeroxed sheet of paper but a smaller, lovely replica of the regular menu) our server explained that not only could would they accommodate a GF diet but many others including vegetarian, vegan, sodium restricted, etc. From what I've been reading up on the food that is offered as GF can sometimes also be taste-free but my trout dinner was SO good it was exactly what I would have eaten prior to my diagnosis. The gala apple slaw, carrots and mashed potatoes were SO good I couldn't believe I was at a restaurant and eating GF and not feeling deprived. I left the restaurant feeling more hopeful than I had in a very long time. Sorry for going on and on like that!

Visited while interviewing in area. Loved the atmosphere here. Live jazz piano/singer. Had the salmon and it was prepared perfectly -- didn't have any symptoms afterward. A little pricey, but a great place with several GF options available. Will be back!!

I ordered the flat bread and the caramelized scallops with risotto. Both were amazing and the service was great! They had a whole separate gluten free and vegetarian menu.

Fabulous place. Separate gf menu and a great restaurant for a special night out. Food is fantastic but the trout is something special. Our server, Christina was fantastic. This place is a must for a quality, gf meal.

Great selection, flavorful and even offered to make a dessert with mousse and Rasberry drizzle. Felt very assured of safely eating here.

The staff were very knowledgeable about dietary restrictions. They have a special menu for gluten-free, dairy-free, vegetarian, and vegan diets. I ordered grilled artichokes with lemon hummus and the rainbow trout, which were both delicious. And I didn’t get sick afterward. The service was impeccable. I will definitely be back!

Great food and we have never had a problem with cross contamination. Highly recommended.