Delicious!! So good I asked if it WAS gluten free. Highly recommend

The GF dough they use has NOT changed, however they did add a cautionary statement to the menu. This pizza is not wheat free, but it is gluten free. It’s made with gluten free wheat starch (gluten removed). This is a common flour used in Italy for celiacs. They showed me the bag. I was very skeptical but I have never gotten sick here. I would not recommend this for people with a wheat ALLERGY that can cause anaphylaxis. However, the GF crust they have is excellent and they take precautions seriously. Excellent Neapolitan style pizza. I don’t think they should be penalized for giving customers all the information.

Updated 6 months ago read full review
This establishment is NOT a dedicated gluten-free facility and may not be safe for those with celiac disease. Please contact the establishment directly to inquire about safety precautions. 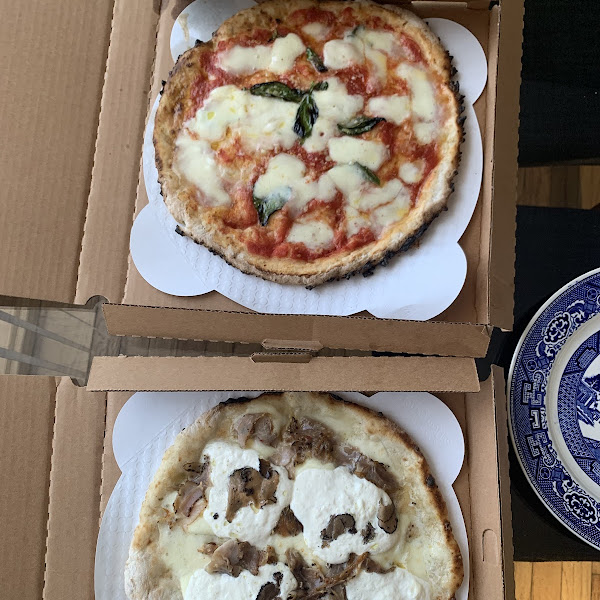 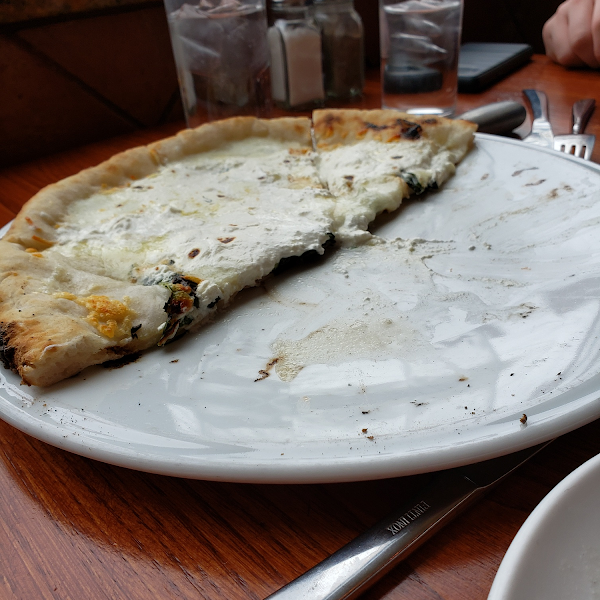 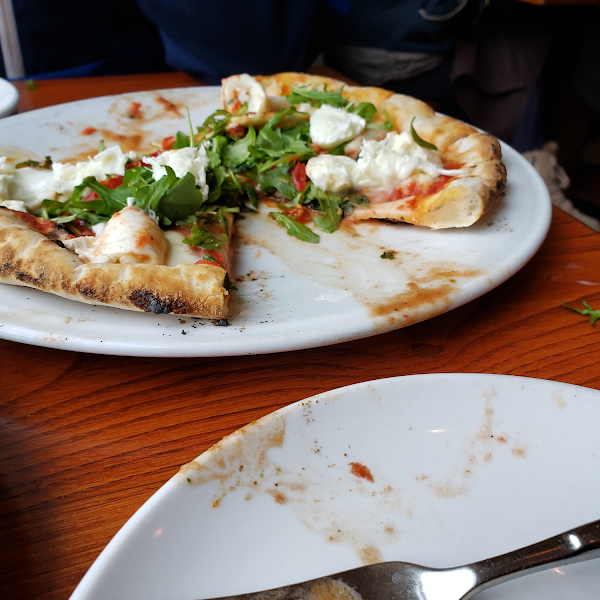 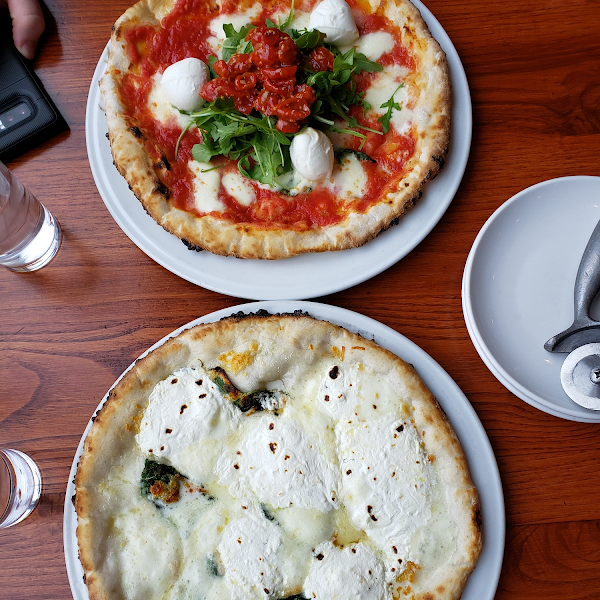 Used to be a great spot for gluten-free pizza. Their website now lists that they use wheat starch in their gluten-free dough. We called and confirmed that this is the case. Apparently they recently changed their recipe. Celiacs beware!

The pizza was pretty good (not great). Ate half for dinner and was very happy with the gluten free crust. Felt a little sick in the morning but thought it was just a cold. Ate the rest of my pizza that morning and as the day went on I ended up with a severe reaction.

Easily one of the best gluten free pizzas in chicago! I personally have not been glutened here, but they can’t guarantee anything is 100% gluten free! Make sure you ask that it be cooked on a sheet pan since they use the same wood fire oven!

I have ordered takeout here a couple of times. Their gluten free pizza is DELICIOUS. However staff has always been very busy and not particularly good at answering questions. I haven’t gotten sick from their pizza, but I’m also not a super symptomatic celiac. They claim to have an allergy protocol for the gluten free options.

Easily the best GF pizza in Chicago!! Highly recommend!!! Slightly disappointed in the staff as they were not particularly friendly or helpful but food was very good!

Staff was very knowledgeable about gluten free and covered their precautions to avoid cross contamination. Pizza was the best tasting g/f crust we have had in months.

After reading glowing 5Dtsr ratings from “celiacs” I went to look if the restaurant had a dedicated space ie procedures in place to prevent cross contact. It took me awhile to find this disclaimer on their site. I am impressed they posted it. That is the one star. “We cannot guarantee a 100% gluten-free environment for guests who are required to avoid gluten due to a medical condition.”

I saw so many good reviews for this place and it did not disappoint! It’s in a quiet residential area and the outdoor seating area was so cute! The crust was pretty soggy but it was still delicious! They cooked my pizza on a separate pan and separated the appetizer onto separate plates so the gf/non gf bread didn’t touch. The staff was very competent and the manager even came out to give me a free sample of gf pasta. Definitely will return.

The one with the wood chips and the “gluten free” pizza. After researching the best gluten free pizzas in Chicago, we landed on Spacca Napoli. It was a special occasion because my brother was traveling in from out of state. He has celiac disease and loves pizza so we were so excited to have found a place! We ordered it to go because it was nearly 10PM. We were so excited when we started eating. The pizza was better than any gluten free pizza we had ever had. I couldn’t stop commenting! It was AMAZING! I was unpleasantly surprised to find not one, but two wood chip. When we reached out to the owner, his explanation was that the pizza is cooked in a wood fired oven, so that happens. The gluten free pizza was so freaking good we HAD to go back in spite of the memory of the food chips and the extremely sloppy presentation (for example, I had a mushroom pizza and it looked like they had shaken it violently in the box before giving it to us.)

This second visit, we dined in. We ordered two different gluten free pizzas and when they arrived we immediately looked at each other and said “we did not receive gluten free pizzas last time.” It was obvious simply looking at the pizza that it was a different product, tasting it confirmed that it was gluten free and the AMAZING GLUTEN FREE PIZZA we had enjoyed was, in fact, their normal crusts. No wonder it tastes so good. It suddenly made sense. My brother is a type one diabetic and has celiac disease. The entire weekend that he was here his blood sugars were out of control. They were higher than I’ve seen them in years. We could not figure it out. Now, I understand. Have an eaten a pizza that was NOT gluten free impacted his blood sugar. It explained why his stomach was bothering him and why he had to spend long periods of time in the bathroom.

Best gluten free crust I have had! Many GF desserts. They cook pizza on separate pan.

Best GF pizza (or pizza in general) of my life! It will definitely make you question whether it is actually GF. Eaten here many times and never gotten sick. Can not recommend enough!

So good I was sure it contained gluten. Best pizza I've ever eaten gluten free or not. They cook it on a separate pan to avoid cross contamination. I'm very sensitive and had no issues.

I was scared off by the warning on the menu about possible cross contamination, but I’ve eaten here twice and haven’t gotten sick (despite being super super sensitive). This is the best gluten free pizza I’ve had outside of Italy!

I can’t say enough great things about this spot! Hands down the most amazing GF pizza I’ve ever had. Staff handled the special accommodations like champs. Cooked the GF pizzas in the stone oven on their own baking sheets.

Oh my goodness this is the best gluten free pizza I have ever had! The crust is magical. It’s chewy. I haven’t had chewy pizza crust in five years! I don’t know how they did it, but it’s magical. The cheese is amazing. The soppresata is amazing. This is worth a drive if you’re not nearby. Patio was great and the service was great. My non gf dining companion raved about the regular pizza as well. WOW!!!

Had the prosciutto e bufala (asked for the bread on a separate plate for the gluten eaters in our party) for an appetizer. Delicious! Ordered the funghi e salsiccia and the Bismarck pizzas. Pizza’s were delicious first out of the oven, but less so as dinner progressed. Eat them fast 😋

We went here because of the celiac friendly reviews. The pizza was amazing, but both my brother and I had symptoms the next day. I requested the GF crust in advance and said the word “celiac” when I reserved and when ordering.

They have a gluten free crust, which they suggest you call ahead to assure they have available (I guess sometimes they run out?). Shared oven, but will ask if you need your GF pizzas cooked on a tray. They provide pizza cutters at the table as pizzas come out uncut. We've eaten here with our two celiac daughters many times and have never had an issue.

We started with the burrata cheese appetizer within GF bread. The bread and pizza are OUT IF THIS WORLD!! Nice chew and thick crust!! Can't wait to come back!!

Not deep dish. Great pizza! No desperate open. But they due use a tray. Felt mislead by the prior reviews. But still very yummy!

Great service! Brought out food in less than 10 minutes from ordering. GF pizza was delicious, and I did not get sick! They also use quality ingredients you can tell when you taste the food.

Home made Gluten Free crust cooked in a brick oven (on tray). Crust was magnificent - best I have had and I live in Metro NYC. All fresh ingredients. Tried the traditional red sauce as well as the white pizza. Waitress suggested saving the crust to dip into Burrata, which I did and was super grateful for the suggestion.

The BEST gluten free pizza I have ever had. So many fresh ingredients. Fantastic salad, as well as great authentic Italian GF deserts

I call 24 hours in advance to reserve the GF crust. They will also ask you if you want the pizza cooked on a separate pan to avoid cross contamination. Servers are very knowledgeable on what toppings are GF. Great pizza!

Still the BEST GF pizza in CHI. They always have GF crust & their sauce is AMAZING!!!

Amazing. And sometimes you get lucky & they have GF crust without notice. :)