I ate at the Three Broomsticks and had the spare ribs platter with roasted new potatoes and corn on the cob. It was delicious and I had no reaction at all.

https://www.universalstudioshollywood.com/web/en/us/dietary-food-guide is where to look for the gluten free options. I have eaten at Krusty Burger (gluten free bun but the fries are not safe), Mell's Diner (only place with gluten free bun and fries), and the 3 Broomsticks (Spare Ribs Platter is fantastic) on multiple occasions without a problem. 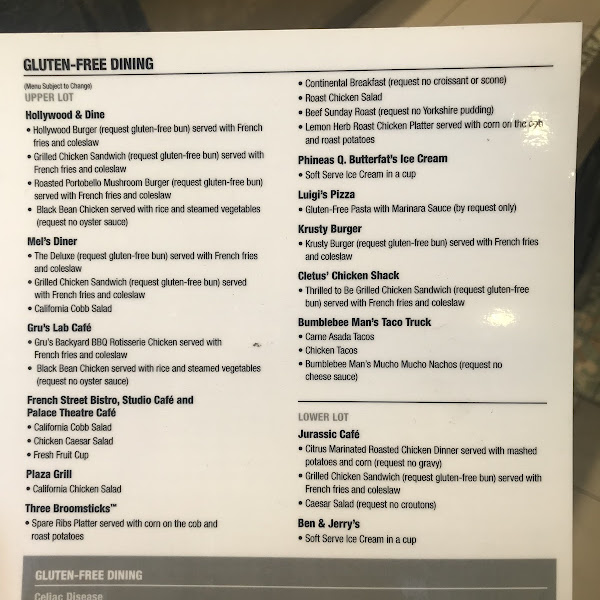 Tl,dr: Don’t trust their claims about accommodating allergies. Bring your own food.

My 11-year-old daughter, who has celiac, was given the wrong order at Krusty Burger. We didn’t realize it until she’d eaten half of her meal — which had a gluten bun.

So, she was full-on glutened. And an hour later, she had the mortifying experience (especially for an 11-year-old) of throwing up on the Universal Studios tram ride. We got to pull the emergency stop and everything. Fun.

We were careful. We stressed _Celiac! No gluten!_ when we ordered, confirmed the receipt said “no gluten,” and checked the slip that came with the order. But they put the right slip on the tray with the wrong burger and that was it.

Universal Studios is making an attempt at accommodating allergies, at least in their marketing. We got their brochure and a cheerful spiel from guest relations when we entered the park. But obviously the system isn’t reliable.

And in fact, the head (?) of food services we spoke with mentioned that just the day before, a kid with an egg allergy was given an “egg-free” doughnut that, you guessed it, had egg in it. The rep had just come from a meeting about it, matter of fact.

The food services rep was also quick to emphasize that he’d identified the people responsible for my daughter’s wrong order, but my wife and I stressed that we’re not out to get a line cook fired. The problem is systemic. He disagreed and said the system was good, it’s just people weren’t following it. (I think we may have a philosophical difference on what “system” means — i.e., a system that people don’t follow is not much of a system).

Anyway, we talked to many people in guest relations. They were all apologetic. And eventually, they comped the meal and gave us free return tickets, yadda, yadda.

But that’s not much help, since my daughter is too sick to go back, and the rest of our visit to L.A. will be spent in our Airbnb while she recovers. She’s also a Harry Potter (and Simpsons) fanatic who has been looking forward to this for years, but she’ll head back east without having seen much of the park.

I also don’t think the people at Universal understood our main point — unless they have a system that works like clockwork, they can’t advertise that they accommodate allergies and health conditions. Because they don’t. And I understand why — accommodating so many issues at so many restaurants at that volume can’t be easy. But better off for everyone that Universal is honest about what it's capable of — that way, at least we can protect our kids.

P.S. If your kid is Harry Potter fan, be warned that all of the candy they sell in the fabled Honeydukes “shares equipment with and is produced a facility containing peanuts, tree nuts, milk, egg, wheat, and soy.” Bummer.

Ate at Hollywood & Dine— they were very specific on cooking and made my meal in a different part of the kitchen. I had the Chinese rice bowl with no oyster sauce per the GF info sheet at the restaurant. However when it was given to me it came with a packet of soy sauce.

Just visited over the weekend with my teen celiac. I read all the reviews I could find ahead of time. We first went to Bumblebee Man's Taco Truck in the Simpsons area as it appeared from reviews that this would be one of the safest places. However, when I asked what their gluten free offerings were, they told me they had none. It turned out they had "lost" the paper describing allergens so could not recommend anything. We went to Mel's Diner which offered a GF bun for burgers and also has a dedicated fryer for fries. It made me nervous since they also serve breaded items, but the hostess insisted they use a dedicated fryer for potatoes. My daughter had a burger on a GF bun and the fries without any reaction. The bun wasn't very good (I think they don't toast the buns) but she could eat. We found better and healthier food later at The Three Broomsticks where the servers had access to all allergen info on the menu computer and there was nothing fried. Overall Universal does not have the same attention to allergies at Disney, but my daughter was able to eat without having any reactions. I would have been less nervous if a manager or chef had come out to speak with us or if only one person was handling the GF food.

I went to the taco truck and the cashier asked a chef about the GF items. He told her everything was GF. I got chicken tacos and my sister-in-law who is also Celiac got nachos and neither of us had issues. Not much variety but at least we were safe! And there's Dip N Dot stands in the park too for dessert. :)

Actually kind of surprised. Krusty burger has GF fries if you ask for no seasoning. They have a GF bun too (though it's gross) and they offered to have employees change their gloves. The taco truck chef said everything in the menu was GF. Additionally, you can bring snacks in if you tell them about your need for GF snacks.

Go to Mel's Diner- they have a separate fryer and meal prep area for GF. Only two choices (chicken sandwich or burger)but it was awesome. Park food but I was grateful to have these options! GF not on menu but restaurant employee knew exactly what was safe. Had a few calories today but def no gluten!!!

Do not trust anyone at Universal Studios Hollywood. that act like they know then ignorantly cross contaminate everything. The managers will insist they know then fail the simplest things saying, It's only the bun," and "that never touches the food" when the hands touch both.

I have a burger with a gluten free bun. And fríes.