Our server was helpful she seemed to truly care about finding gf options for me, we notified ahead that I needed GF options. Our menus showed vegan and gluten free (these don't show online). I was brought GF bread and the server was very helpful in choosing sides and menu items.

The menu clearly had GF marked next to gluten-free items. Our server was very knowledgeable and understanding when we visited here with our children, 2 of which have celiac disease. We were also served a hot Udi’s French baguette, which my kids LOVED, since it’s such a rarity to get gluten-free bread at a restaurant.

I went to Del Friscos for the first time this year on my birthday because I was excited about their gf menu. Unfortunately, despite ordering only items marked gf and suggested by our server (steak, mashed potatoes, brussel sprouts, bacon appetizer) my food was contaminated and I was extremely sick after leaving the restaurant. Some red flags from the overall from the experience: while our waiter was cutting into our steak, he suddenly stopped and asked if butter was okay (how is their staff so poorly trained that they don’t know butter is gluten free; also why was he asking me this question he had already brought over our prepared food); also, my fiancé called after we realized I was sick and the manager on the phone was not apologetic at all. She asked if I had ordered a beer at the bar before sitting down for dinner as “beer is not gluten free.” As someone who has been managing celiac for most of my life, I found it offense when the manager started questioning if I had consumed products that are obviously (to anyone with celiac) not gluten free.

Celiac Safe - the staff is very knowledgeable. Free of cross contamination. Another person suggested ordering ahead the gluten free bread - we did and it was great . The tomato Buratta salad , mashed potatoes , filet , corn and even some desserts . Enjoyed . Tested w Nima it was fine

Delicious food with a marked GF menu. My side dishes passed the Nima test too.

Fantastic experience at Del Frisco's. GF items are clearly marked on the menu. The staff asked good questions indicating they understood the difference between a preference and requirement. They brought me a GF UDI's baguette straight out of the oven and it was delicious. The steak and sides were excellent.

Staff was extremely knowledgeable. My husband made the reservations and told them I was gluten intolerant, they server. Already knew when he came to the table. The food is great and I didn’t have any reactions. The main menu is clearly Marked for GF. The server knew why the others were not safe. He also knew which specials were GF and which were not.

one of the best dining experiences of my year! expensive, and worth every penny. our waiter was extremely accommodating and knowledgeable about gluten. they have fresh gluten free baguettes!! almost every dish is available GF. an exquisite dining experience, no gluten issues for us. my husband is Celiac, I have an allergy.

Unfortunately got sick from eating the Filet Mignon (marked Gluten Free on the menu). I felt sick almost immediately after I finished eating. It pains me to write this review, as I’ve enjoyed this restaurant prior to being diagnosed, but it doesn’t seem like the kitchen/staff takes the necessary measures to avoid cross contamination.

Always delicious. Staff has always been knowledgeable and happily accommodating.

Fabulous steak! GF items are marked on the menu. They even brought GF bread prior to the meal.

I had a birthday dinner here with my wife and it was awesome! Staff was knowledgeable and attentive while upholding the restaurant’s high standards. They had gluten-free bread for me when they brought regular bread for my wife. Menu was clearly marked as to what could be prepared gluten-free and I had no problems. I had an appetizer of peppered bacon with molasses and an aged ribeye for an entree with sides of Brussel sprouts and truffled mashed potatoes. For my birthday dessert they prepared a chocolate mousse presentation with raspberries and blackberries and whipped cream that was delightful!

Excellent food, one of the best meals I have ever eaten. Filet was perfect, waitstaff was extremely competent and didn’t hesitate when asked what was / wasn’t gluten free including concerns of cross contamination.

Their menu has a lot of options to choose from. Our waiter understood my need for GF and he made sure everything I had was for sure made gluten free. He also went above and beyond to let me know of a few more items they could adjust a slight bit during cooking and/or preparation to give me even more options than the normal GF on the menu.

Excellent service. Delicious, mouth watering meal. Worth every penny. Our waiter, Ryan was kind, helpful and knowledgeable. We even had the most delicious gluten free bread before our meal - a rarity.

Great Gluten free menu options. Even the bar staff new what was good and what wasn’t.

Knowledgeable staff. If you let them know with your reservations that you need gluten free, they will have loaves of gluten free bread baked upon your arrival. If you forget, they will still bake bread but you will have to wait about fifteen minutes.

The food was five star worthy but unfortunately the menu needs work. Two things I tried to order off the GF menu turned out to not be safe (cocktail sauce for shrimp cocktail, dressing that comes on del's salad). Thankfully the server did as she promised and checked on each thing I ordered, and the chef made accommodations - the garlic sauce for my shrimp was phenomenal and I just used oil and balsamic on my salad - but what if she hadn't been so helpful? I didn't get sick and it didn't ruin my night thanks to great steaks and spending time with friends, but, disappointing.

It was my grandparents 45th anniversary and what a meal!!! We got to meet Chef Dan. I loved the Caesar salad so much, it was amazing! Our waiter, Rock, was very knowledgeable and helpful. There was great steak and mashed potatoes which were the bomb!! I would go again in a heartbeat! Our waiter even noticed that I was ordering off the gluten free menu and he said "no croutons, correct?" It was so nice to not have to mention I was gluten free! Now featuring a full gluten free menu!!!!

Kinda mad that I read here that they have gluten free bread. I asked my survey if they had a gluten free menu and she just told me what options I could have and didn't bring out any gf bread...had to suffer watching the entire table eat all the bread, not nice Del Friscos!!!

On the bright side the filet minion was delicious and the the sides were delightful, as expected for their brand. Just mad now that they didn't offer me any bread.

Server seemed knowledgable. I had a steak, vegetable and mushrooms. Did not get sick. Food was great!

Gluten free menu includes all steaks and 5 or 6 side dishes. The gluten free baguette brought to the table before the meal was one of the best gluten free breads I've ever had. They buy their bread from the Something Sweet Without Wheat Bakery. When I told the waiter how good it was he came back with an extra frozen baguette for me to take home. Service and food is great and Del Friscos is highly recommended if you are looking for the steak house experience.

Unbelievable service! Called ahead of time. GF menu and the sever was very knowledgable!!! Will recommend this to anyone who has Celiac or Gluten Allergy

They have a gf free items and celiac friendly too.

Food is good, but there is no gf menu. Server said a few dishes could be made gf, but I didnt feel like there were many options. No local oven products! 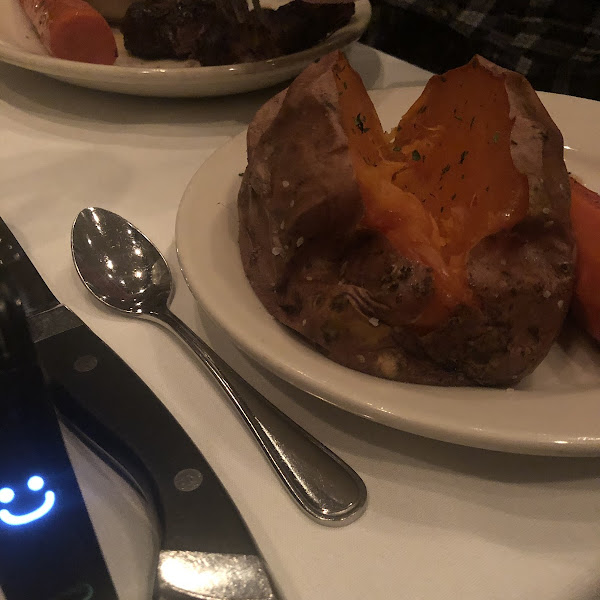