Decent gluten free options, but I got food poisoning after eating here.

Friendly and knowledgeable staff, plenty of options for my wife who has a severe gluten allergy. Great value!

Delicious food, but very confusing menu, and so loud it was difficult to communicate

I’ve eaten here a lot and never had an issue. Their website shows all allergens. Definitely a chance of cross contamination but again never a problem for me. And the food is great.

fresh&co is the best! They have a large assortment of gluten-free options that range from sandwiches, soups, breakfast items, grain bowls, desserts, salads and more!

The owner spent 10 minutes with me, explaining everything on the menu and every option I had. She made it very very clear that it’s not safe for celiacs

They don’t tell you exactly what is and isn’t gluten free- a lot of their dressings are not! Chipotle lime one and yogurt poppy seed ones are for sure. Brown rice is and most of the grain bowls just have veggies so they are safe. Southwest grain bowl is one of the best salads I’ve ever had!

I had their Brussels sandwich and it was really good!

Nothing good gluten free here. Over priced and not worth the time. The salads are pathetic

They first served me an English muffin that was not GF. Then gave me a GF bagel that was placed on the counter full of crumbs and put in the same toaster as all other non GF items.

Michelle A.
Not celiac

Food was good. Everything is labeled on the website.

There where only a bagel and soup/ no sandwich. Unsafe/ cross contamination - all display and bake in the same place

This place is a load of crap. The only reason they got one star is because I had to to leave the review. They use gluten free ingredients but don’t use separate ovens or toasters. They have no clue about cross contamination. I will never go back.

We had the farmhouse egg sandwich on GF bread it was excellent! They have a lot of options for GF salads, sides and lattes. Latte was excellent also. Seems like cross contamination would be an issue for those sensitive due to use of same surfaces and same toaster. We did not have an issue and enjoyed it.

If you have celiac disease do not eat here.

If you have celiac disease do not eat here. Made the gluten free pancakes on the same grill as the gluten products. They wiped it down before they used It, but there were still crumbs on grill.

No gluten free bread. Only at breakfast?

They use the same general oven to toast gf bagels; staff rolled their eyes when I asked what they do to prevent cross contamination. Definitely not safe.

Was able to order online, and had multiple options to satiate my sausage, egg and cheese on a (gluten free) bagel craving. Definitely getting from here again

We had lovely pancakes, very tasty. Busy place, contamination likely, but we felt well after eating there.

I was very pleased with the selection. Breakfast options are good. Pancakes and toast. Great salads and bowls. Very fresh and healthy options.

I love this place for breakfast!! I get the Power BLT on a gluten free wrap. It's the perfect, sustainable breakfast. They use fresh, local ingredients which is nice as well. They don't use a separate counter, toaster oven or knife so celiacs just be aware.

The soups here are great! My favorite is the kale lentil quinoa. Hard to find things both gluten free and vegetarian so this is perfect

Have GF items (bagels, pancakes, muffins), but use same grill as regular pancakes even when I told them allergy. Best to stick with muffin, but the way they don't seem to care about allergies, even that's tough to trust

Restaurant chain that serves fresh food. Lots of gluten free options like bagels, brownies or salads. Beware of cross contamination, the kitchen is small and open and the only have one baking plate. However, in our case the staff were very careful, putting on clean gloves, opening fresh creamcheese etc. We enjoyed our meals and did not experience any effects ourselves.

It seems like it's hit and miss here, depending on who is waiting on you. I ordered a GF bagel and the girl put it to toast in the same oven as the regular bagels. It's a rotating oven so crumbs were dropping from the other bagels. I told her I can't eat it and she was not happy. What? I asked someone else what I could have and they said anything on the menu. What? Completely lacking any knowledge or sanitation practices.

Had the gluten free pancakes. It was good, but not amazing. GF items were a little pricey comparing it with the regular menu items.

Gluten free bagel was amazing! Make sure to tell them if you have a true allergy and the girl was happy to change her gloves and do there best to keep things clean.

Not celiac friendly. Called company spoke with CMO, they do nothing on cross contamination.

Avoid this place. I asked about a GF muffin being dairy free, was told by manager that it was. Took two bites on my train out of the city, 6th sense kicked in and told me to stop. Called the store and asked again, same answer (7th Ave). Called the one on Park, got totally different answer from the chef who handles all of that. Furious, and now sick and $15 lighter between that and a supposed GF/DF breakfast wrap. Rude counter help. Refused to make me a GF/DF Sandwich. Said only what was premade was available, that I could take the cheese off. They clearly have no idea what they are doing and all their advertising of GF/vegan/organic options are bogus.

Excellent choices, including GF pancakes! They use the same griddle, so I wouldn't recommend pancakes for celiacs. They have salads galore, too! Organic, fresh, fabulous!

They had a tasty gf bagel. There is definitely an issue of cross contamination if that's an issue. They do have muffins etc.

Do NOT go there if you are a celiac.

I've gotten sick every time I've tried to eat here. The last time I went I asked for a gluten free egg wrap. I always confirm that it is gluten free when they hand it to me, and the cook says oh, you wanted it gluten free. They proceeded to argue with me about whether or not I asked for it to be gluten free, and I told them I absolutely did because I get sick if I eat gluten. Then when I told them they had to remake the eggs they got very annoyed. Never again!

had a salade with chicken. no sign of cross contamination.

Some GF options, but no awareness of cross-contamination. So pick and don't let them slice/cut/cook. Get in separate bag

Horrible cross contamination and lack of knowledge about it.

Very poor selection and NO attempt to prevent cross contamination. While standing there waiting to order an omelet I watched the server cut and wave bread right ON TOP of all the omelet ingredients. Bread crumbs went EVERYWHERE. Needless to say I went without breakfast...

Grabbed tea and a delicious GF pumpkin cranberry muffin on my way to meetings. Yum!

My go to place while in NYC!!!

Cross contamination, I had to watch every move. They use same cream cheese, knives, gloves for gluten and gluten free unless you ask for cup of cream cheese, change gloves and wash knife. Not very knowledgable about GF.

Lots of GF options. Options to dine in and to take out. Very casual place.

GF soup, fruit and salad options available. Not much else for coeliacs. No GF bagels or wraps in any of the several Fresh and Cos we went to.

barely had any gf stuff

This place was delicious for breakfast. GF was near regular items, so if contamination is an issue, then I would ask for something else. Had a delicious GF bagel (that was clearly not touching anything) with egg and cheese. They took my allergy seriously and did not cook with my families bread items. Also toasted with a protective wrapper and cut with different knife. Would recommend and return. 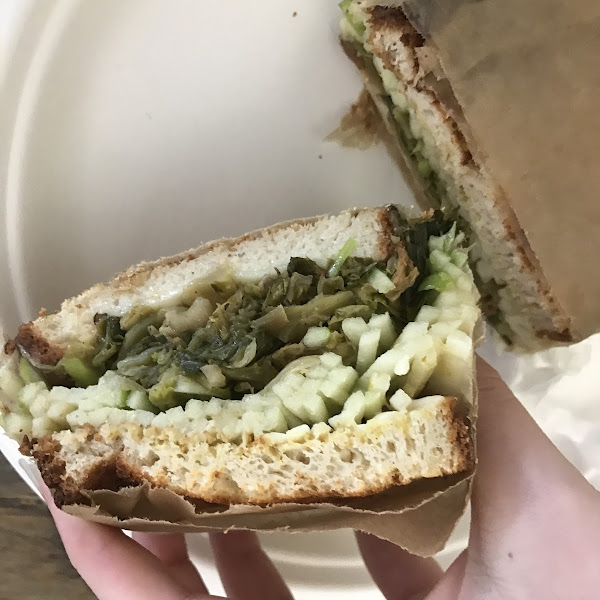