They did an awesome job! So impressed! Most of the menu is available gluten free - including all fried foods! Definitely recommend! So great!

Incredibly good gluten free onion rings!! I have celiac, and I did not react at all. I also had their fries, chicken sandwich (on a gf bun), and calamari. All objectively delicious, and above and beyond what I expected. My new go-to food when I'm in the area.

I almost cried when I found out all the fried food was gluten free! I had the fish and chips - delicious! 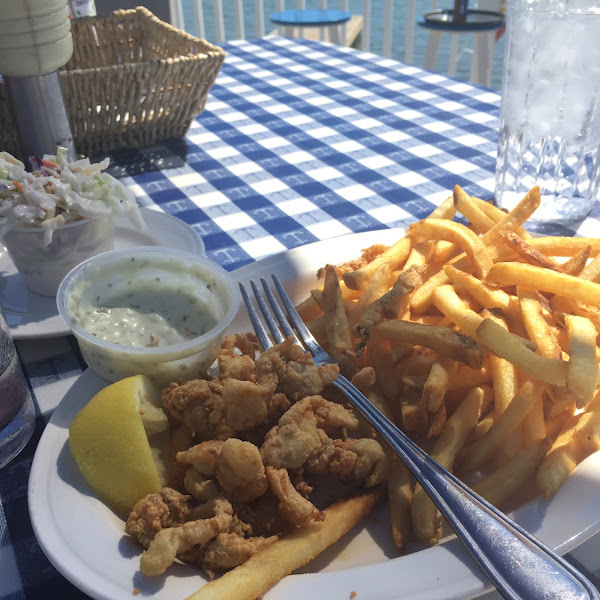 Outstanding experience. Food right through service. One of the best afternoons we've had dining out. Whole menu is open to gluten free options.

They have a dedicated fryer and can make just about anything on the menu gf. I had the fried whole belly clams and french fries and was fine. Best clams I ever had.

Love the food and how knowledge they are .i eat here very often and never got sick

I ate there a few weeks ago, I spoke to the woman in the front before entering, I spoke to the waitress explaining cross contamination, how severely I react. I was reassured over and over how "they get it", I said ok well let's keep it simple anyway, steamers and boiled lobster. Waitress continued to say here you are at a very safe restaurant why not try out French fries or onion rings. Really there is nothing in kitchen that could cause cross contamination? No and we use separate fryers too. I broke down and ordered the French fries. I happily ate my food. No need to explain to any celiac in details what happened to my body within an hour of eating. It was not the clams, or lobster, I was an hour from home we had to pull over several times, you all know why, next morning woke up with the DH rash which proved gluten. I was sick for 9 days, and still have lingering effects. My husband called the owner who was horrified. He said it couldn't be, nice enough guy who truly wants to do right by celiac community, but failed to see the significance of having flour sitting next to the French fries. All it takes is for someone to scoop flour and woolaah cross contamination of any food in the vicinity. Flour stays airborne for 48 hours and dissipates onto any food and pans etc. so no jakes is not CELIAC FRIENDLY, however gluten intolerant people should be ok. I do believe however the owner wants to get it right. So here's hoping he can either do away with the flour in the designated celiac part of the kitchen or use gluten free flours throughout the kitchen. Which by the way is what LEGAL SEAFOODS HAS DONE.

This place did not pop up when I was searching for nearby restaurants, but I was elated when we stopped here and found out they have a dedicated fryer!! Great and knowledgeable server and the best gf clam bellies I've had besides Legal's and yummy French fries. Beautiful views outside and they allowed our dog to sit with us while we ate. Will be back asap! 😊😊

I enjoyed my seafood platter. Our waitress was very nice, I felt that they really take GF seriously. They even provide a GF ketchup. Will definitely return.

Amazing! Very knowledgable and understanding. Have an extensive gluten free menu and a designated fryer!