We went to Little Goat post pandemic, reading they had a great GF menu. This was not the case. They had 2 items that could be made gluten free and we had to ask the waiter about them. Sadly, this is my 4th time trying this place, but it always falls short.

Really great food here. Separate GF menu however any items with an * are items that have cross contamination. Our server Jorge was knowledgeable on menu items and the precautions taken in the kitchen. They do make their own GF bread but unfortunately it is made in the same bakery as their pastries and was not recommended for celiacs. However they have a separate fryer downstairs where they do the tortilla rounds which they did use instead of bread for my Los Drowned sandwich order. They do offer GF pancakes that’s are not listed on the menu made with rice flour that I am very interested in trying next time.

Our waiter was incredible and knowledgeable about celiac, pointing out the items on the gluten-free menu that may contain traces of gluten and making recommendations for other dishes. Lots of options, good food. 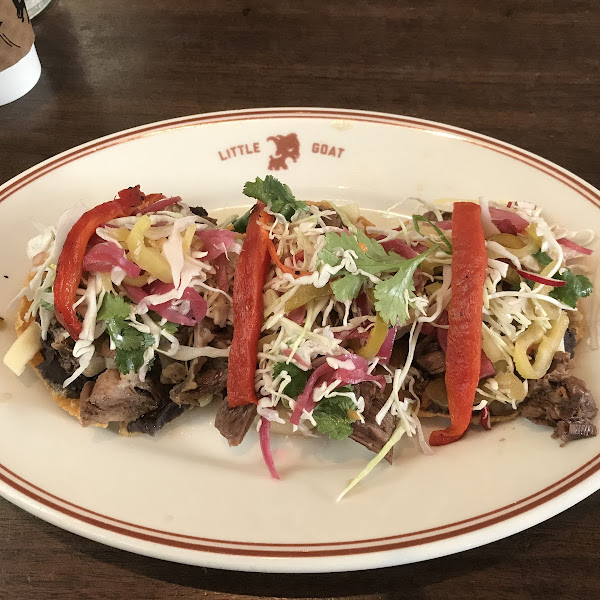 Awesome diner with a chefs Asian inspired take on things. Generous GF menu, breakfast all day, informed staff (even knew malted vinegar was a no go as an ingredient!). Pancakes available but make sure to leave time for preparation.

Awesome place - a must.

I have eaten here more times than I can count and have never gotten sick. The food is delicious!! My favorites are the cheesy crab dip, los drowned, and their smoke fries. It's good portions of food so I usually have enough left for another meal. LOVE this place!

This was my favorite restaurant before I was diagnosed and it still is now. They take great care to tell you what’s safe and what is not and have a separate gluten free menu with lots of choices. I had a delicious breakfast and didn’t get sick at all. Also, they were just nice about it and not everyone is. Didn’t make it seem like a burden.

Decent sized gluten free menu (a lot smaller than the gluten one though!). Staff was knowledgeable and friendly. I'm not 100% sure I didn't get glutened though, as I had the GF chili with fried tortilla chips on top and they may have been fried in a non-deficated frier. I had it yesterday afternoon and have felt off since then, so just a warning to double check!

Edit: definitely got glutened from the tortilla strips on the GF chili. Caution to not have anything fried because there's NO dedicated fryer.

They have a really large GF menu and I actually appreciate that they have stuff on there that isn’t celiac friendly—even though I can’t order everything, that means they know the difference between Celiac and not! When I said celiac, the waiter said “ok just stick to the unstarred items on the GF menu and we will mark it as allergy in the kitchen”. They don’t have a safe fryer for celiacs but you can get the hash browns made in a pan and not on the flat top and they are just as good as French fries.

Given that this is the food district, I was disappointed that the GF menu had 75% of the menu with an * stating that the GF dish “was prepared with trace amounts of gluten”. Not safe for those of us worth Celiac disease. I ordered shrimp and grits and it was very good! I think more attention to the GF menu is needed! Not hard to find GF buns for burgers these days!

My husband is the GF one. I had lots of great choices and my dinner was just fabulous. The GF options were more limited and he ended up with a salad, just to play it safe and because sammie toppings on chips didn't appeal to him. it would be helpful if Little Goat could post their GF menu on line, just so we could have known in advance.

Had a wonderful dinner at Little Goat. Sat at the counter where we delighted in watching all the food come out of the open kitchen. Our server, Jessica, took great care of us, knew the celiac drill too to bottom. Enjoyed a Virtue Brut Cider, an AMAZING smoked corned beef Reuben on HOMEMADE GF bread. Kitchen modified to remove the kimchee which had some wheat in the miso to make it safe. Smoked French fries were rather addictive. And we finished, even though we were stuffed, with a sherbet Sundae, topped with crumbled meringues, which was a surprising, refreshing delight with tart blood orange sorbet and a key lime and cherry sherbet. We’ll be back!

A-mazing! My non gf boyfriend ate from their gf menu and thoroughly enjoyed his Reuben with havarti. The veggie pasta and hot crab dip with masa chips were absolutely delicious. Highly recommend!

i have more than just a gluten allergy do its hard to eat out. but the staff here made it easy and whipped something up off the menu

Gf bread or masa chips for sandwiches. I got Los Drowned (their most popular) on masa chips. Delicious. It was filling so I hardly touched the fries we ordered. Waitress right away asked if I was celiac or if it was a gluten allergy. I only have an allergy so cross contamination does not impact me often. Waitress also asked if there were any other allergies which I've never been asked before. I couldn't find their gf menu online so I took pictures of it.

Little Goat did not inspire a lot of confidence for us. Like other reviews, we caution you to read the g-free menu carefully and ask lots of questions. The fries are not gluten free although they're on the gluten free menu. We got lots of disclaimers that they could not guarantee gluten-free because they are not a dedicated gluten free business, and the gluten free bread and muffins are baked with regular products. Felt very risky eating there, though the manager came to visit us and reassured us that the sous-chef would personally handle my son's meal.

Major issue - their menu labeled "gluten free" lists about a third or more of its items with an asterisk and explanation that they contain ingredients with trace amounts of gluten in them like soy sauce. RIDICULOUS. On the plus side, the staff was well educated and knows the menu, and I didn't become ill.

One of the best restaurants I've ever been to for GF. GF menu is extensive, and they even denote which items are celiac safe vs "no gluten ingredients". The waitstaff are helpful and knowledgable, and the food is wonderful!

Been here many times and never gotten sick. All my server have been very knowledgeable about gluten issues ; I love this place!!!

staff was very friendly about letting me know what was gluten-free and what wasn't, but the gluten-free menu was highly discouraging. half of it was labeled as a risk, as there's a lot of cross contamination potential or slight gluten ingredients.

I was super disappointed, as others had hyped up the gluten-free pancakes like they were God's gift to the intolerant. when I went to order them, however, I was told they're not a good idea if I'm fairly allergic, as the cooking process had changed and now has a lot of cross contamination.

I ended up with a vanilla milkshake and some home fries, and while the fries were the best potatoes I've ever had, I couldn't really get over how minimal the menu options were after I factored in the cross contamination. I didn't get sick, though, so that's a plus.

If you go, just keep that in mind. The menu tries to warn you what may or may not be contaminated (which, again, is a lot), but encourages you to ask your waiter, as the menu isn't 100% accurate.

Staff very helpful and food was fabulous. I was there for a meeting, they let me know which dishes were gluten free and even made gluten free alternatives.

the name says it all. expect diner food. service was on point, but it wasn't enough to make me a fan.

They took amazing care of me- loved it and will return!!

The Los drowned is amazing! So fresh tasting.

Yummy food! Gluten free menu and the staff knew what was safe for celiac's vs. just gf food.

Gluten free menu and some really great options. I really liked the masa chips as replacement or bread on the sandwiches.

I dream of the shrimp and grits and smoked fries. It is also kid friendly so the whole famille can find something great to eat and I feel safe eating.