I've never gotten sick from their GF crust. I have to have my Minsky's fix whenever I'm in KC.

They take very good care of us every time we go! Great service and food with gluten free options! Our experience has been great with minskys!

Great food, did not experience any symptoms! The menu stated that staff is trained on celiac disease and avoiding cross contamination. 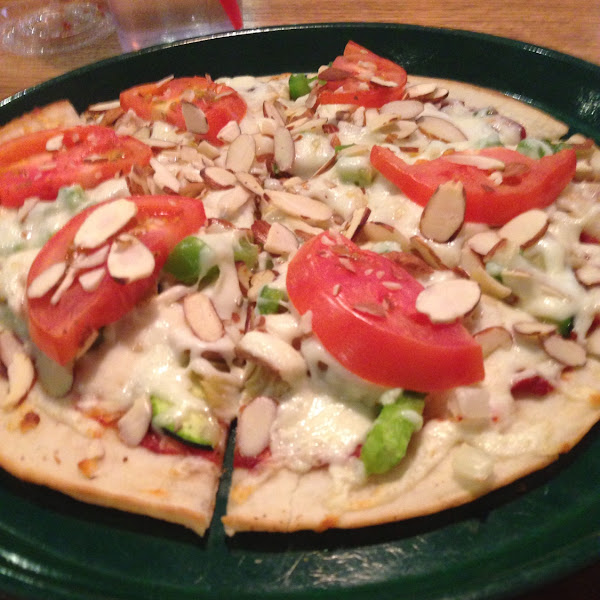 Great tasting pizza for hipsters on pointless fad diets. My 3YO Celiac was immediately glutened despite the great reviews and the fact that I called to talk to the manager beforehand. Jamie and Jessica were the managers on shift.

Top rate pizza! Loved that my husband could have regular and I could have mine gluten free.

They have an excellent gluten free pizza which is pretty decent sized for the price. Unlike many other places where the gluten-free pizza is about the size of a personal pizza I can usually eat four or five pieces of theirs and be full. Sometimes the crust is not quite cooked all the way so it gets a little soft in the middle but then the edges are rock hard like they can be when it's cooked completely.

Im happy with their service. gluten menu was there. food was really good. thank you!!!!

About two weeks ago, I ordered a medium Canadian bacon with black olive and extra cheese pizza on original crust at the Olathe location. When the pizza arrived, it was completely trashed. It wasn’t tossed correctly (the edges of the crust were jagged and dried out), there was no extra cheese on the pizza, and there was next to no sauce on it. Worst pizza that has ever come out of a Minksys. I called back and complained to Ben, and he stated the next pizza would be free.

When I called back today, a person answered the phone who did not initially give his name. I ordered the replacement pizza, advised him it was supposed to be free, and explained the previous problem. He stated Ben had only put an $18 comp in the system and that I would be required to pay sales tax. I told him I wasn’t going to pay sales tax because I paid $21.69 the time before, and the whole order was supposed to be free. When he refused, I asked to speak to a manager. Then, he claimed to be a manager. When I asked for the district manager’s name and phone number, he also claimed he was the district manager, which is ludicrous, because a district manager would not be at that location taking orders over the phone. Next, he hung up on me. I called back two more times to ask for his name, because obviously I was going to complain about him, and he hung up on me each time. The final time I called, I told him f he didn’t give me his name that I was going to drive up there, because I am only about 10 minutes away. Only then did he say his name was Ron, and when he gave me his name he claimed he had given it to me before, which he had not. I reiterated he hung up on me each time I asked for his name, and he chuckled under his breath. This is the most unprofessional restaurant experience that I have had in my life. Someone needs to fire this guy. So I decided to call the State Line location to find out the owner's name and number.

When I spoke to Michael at the State Line location, he stated Ben would call me back within the hour, and he apologized for the employee's behavior. When he had not called me back by 3:15pm today, I made a trip to the restaurant. He wasn’t there, but Ron was. When I confronted Ron about his behavior over the phone, he repeatedly lied. He stated he never claimed to be a district manager and never refused to give me his name. He stated he had only hung up on me because I cussed at him, which is inaccurate. I am assuming he said this because another employee was present. Needless to say, he infuriated me at this point, and then I actually cussed at him. I told him if I ever picked up the phone again to make an order or if we came into the restaurant and he was still employed with the company, we would never do business with this location again. Then, he and one of your other employees asked me to “get out”. Hopefully, Minsky's is prudent enough to record customer phone calls for quality assurance, which would make my entire story verifiable.

We’ve been eating at this location for almost eight years, and neither of us have ever been treated so poorly. At this point, I refuse to do business with Minsky's again. I have disputed the $21.69 charge with my credit card company.

We order from here all the time. The pizza is delicious, but a little pricey for us.

They have gf menu on the back of the menu. Lotsa yummy pizza and they have gf traing. Love this place

Never an issue with my 3yo daughter with celiac.

Best GF pizza I've had to date! The crust wasn't a dried up cracker like most and there was an ample amount of toppings!

Very good pizza but not quite as good as Waldo Pizza. But it is cheaper. They have a gluten-free menu and also vegan options. I get the gluten-free, milk-free, vegan pizza full of veggies. Very yummy! Very understanding of food allergies. Nice staff. Sign up for their rewards program for coupons and free pizza after earning so many points.

just ask for the gluten free menu no guessing

My favorite food has always been pizza and when I found out that I had gluten problem I thought I would never get to eat pizza. Until someone said that Minisky's had GF pizza. And it's so delicious! Plus it helps to know that their staff has been trained on how to prepare it.

They are careful with gluten free pizza!

We went with my kids and requested a gluten free pizza. I explained that my son has celiac disease and asked if the pizza would be prepared safely, with minimal risk of cross contamination, as he has very severe reactions to gluten. The waitress acted like this request was inconvenient and I’m not sure she understood what I was telling her. Our pizza arrived and we ate. Not long after, my son began having a severe reaction. It has been 2 days and he is still very affected by the pizza and apparent cross contamination.

I would highly suggest some re-education in this location. We have had nothing but great experiences at other Minsky’s locations. We will not be back to this location, unfortunately. Not worth the risk.

They have gf, cauliflower and zucchini crust. Gf is a little chewy but cauliflower was good. Have Daiya (dairy free) cheese. Good options for toppings including ‘Beyond Meat’.

This is our go-to for gluten free and dairy free pizza in Lee's Summit. I am very severe Celiac and have never gotten sick. They have a separate gluten free menu, and I feel like the servers are always aware of my needs.

This is one of my go-to restaurants! I'm celiac and very sensitive but I've never gotten sick. They do a great job and the pizza is too notch!

Pizza was good but it was Udis crust nothing special.