(216) 896-9020
paladarlatinkitchen.com
Reported to be doing delivery during the COVID-19 pandemic

Food was amazing! Waiter confirmed I had celiac and would be sensitive to cross contamination. Had veggies with guacamole due to shared fryer on chips. Amazing fish tacos!!

Had 2 wonderful experiences here! The gluten free duck tacos were so delicious. Will return 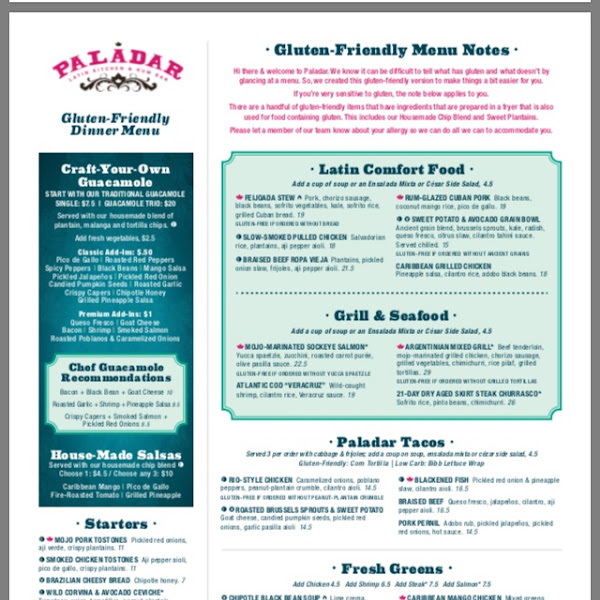 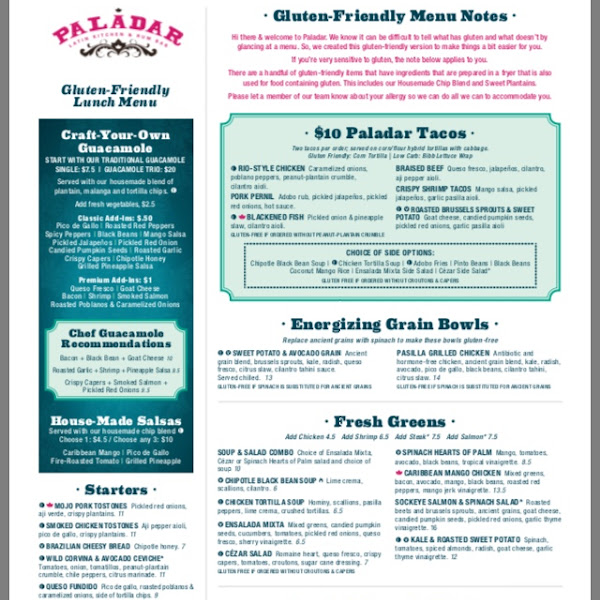 the food was amazing. our server Tim had great recommendations and they all were amazing. GF try the Brazilian Cheese Bread appetizer and trust me you'll be in heaven.

Love this place!!!! I don't get sick at all. The guacamole is to die for!

I had been coming to this restaurant to enjoy their GF menu. Unfortunately, even though I told our server about my Celiac handling requirements, there is a gap in the food handling and delivery. I love the restaurant but I've been sick 3 times & spoke with the manager to complain. He admitted there was a gap once the chef prepared the meal to the delivery & care is not taken to prevent cross contamination. I had to end my love for Paladar until they change their process. :-(

Paladar has a separate gluten friendly menu and uses washed, cleaned separate surfaces for cooking with gloves. Staff is helpful and friendly and food is delicious

They have a gf menu with lots of choices and they were accommodating to my dairy free request as well.

This restaurant served me regular flour tortillas, and their staff did not know how to do gluten-free.

I ordered tacos, and ordered them with the gluten-free tortillas. I discussed with the server that I have celiac, the importance of avoiding cross-contamination, etc, and he assured me they would take care of it.

When I was brought my food, I verbally verified with the waiter that it was gluten-free, and was assured it was. Looking at and smelling the tortillas, I became concerned that they were flour tortillas. I asked two more waiters if what I had in front of me was gluten free, and they both said yes. I finally got an assistant manager to come look at my plate, and was finally told that no, I had been served their regular flour tortillas.

I then found out that one of the ways that Paladar is supposed to differentiate between gluten-free and regular taco orders is that the gluten-free tacos only come with two tacos (instead of three for the regular tacos) - meaning that in addition to the kitchen's mistake, three different servers looked at my plate and didn't know enough basic information about the restaurant's gluten-free food to know that I'd been served the regular tacos.

Speaking to the assistant manager and eventually the general manager, I heard a lot of platitudes and not much else, and was even given the excuse that they were very busy that night.

I strongly, strongly discourage anyone who eats gluten-free from eating here. They don't actually know what they're doing.

Staff is very knowledgeable about celiac and cross contamination and GF menu is very detailed as well.

Decent gf menu but the food is a bit lacking. Monitors are great though.

They have a gluten-free menu and they’re very conscientious about cross contamination. They have good vegetarian and vegan options. I ate the jackfruit tacos. They were smokey, tender, and delicious. Their black beans and very flavorful, but I was disappointed when I realized my cup of black beans was mostly rice underneath a layer of beans. Portions are generous. I had enough left over for breakfast the next morning. Service is good and attentive, but it also tends to be a little slow. This is a restaurant that can get very busy, so you might want to make reservations if you plan on going Friday night or for brunch. Prices are a little high.

Great decor & staff in a really nice area. I did take out one night we were in town. Also dined with 23 others. They accommodated my gluten-free & vegan needs but also a great place for all kinds of diets especially with a big group. Food was safe and good but not great flavor-wise.

Great menu with lots of options. Knowledgeable staff. If celiac, tell them highly sensitive so that the chef makes sure food is not cross contaminated. Server recommend staying away from the tortilla chips to be safe. Appreciated that heads up. Missed the chips but got some crunch with carrots and Cucumbers with guac. Nice outdoor seating as well. Enjoyable and stress free dining experience. Highly recommend.

The best meal I’ve had out in a long time. Our waiter was super knowledgeable, made sure I had no issues, and made it a super stress-free evening. Seriously was doing a happy dance in my seat because there were so many yummy things I could eat without any worry!! Their GF menu specified what might be cross-contaminated too, so helpful!

I’ve honestly had several gluten reactions from this place and I’m not super sensitive nor do I have celiac so I’d be careful. I go for the tacos maybe other options are safer

Really enjoyable and delicious meal. Many GF options including cheesy bread rolls which were incredible. The menu not only listed GF but indicated if items were cooked in the same fryer as gluten containing items. Wait staff were knowledgeable and very accommodating. Highly recommended.

Paladar has their own gluten free menu upon request with a decent selection. They are also able to make substitutions to make other dishes gluten free. The plantain chips with guacamole are great!

They have a menu that designates gluten free but beware of (!) markings which delineates things are cooked in common oils, thus not really making it gluten free. That said, the protein bowl and gazpacho were delicious. They are famous for their guacamole and when I asked, they gave me veggies to dip since their chips are not gluten free

They have a great gluten free menu but it was not available on Mother's Day (or Easter apparently) because they were only offering a buffet. A huge disappointment that we were not told in advance. We go every year for mother's day and the buffet is new.

Wonderful! 6 y/o is celiac and life threatening allergies to all nuts (including shared lines), egg, and soy protein. Chef came to the table and discussed safe options. Many options available. Chef convinced our little one to try a tortilla he was able to safely make! She ate almost all of her meal! Because we were celebrating and 3 other kids in our party were planning on an ice cream treat, we confirmed ahead of time the ice cream would not be safe b/c of shared lines and stopped on our way for a safe kind...restaurant staff were nice enough to ours safely in their freezer until dessert time! Will definitely eat there again!!!

Been several times with my super sensitive hubby and he has never been sick. Yummy food!

amazing! best staff and incredible food and even dessert!

i ordered the al pastor tacos on corn tortillas off of their gluten free menu. Definitely got sick.

One word: AWESOME! My server was very knowledgeable. She caught a hidden tree nut allergen in my drink. Looking forward to another visit in the area. Blacken Fish Tacos with their Mango Salsa and Blackberry Thyme Mojito . . . Yum!

Amazing food the GF cheesy bread and tacos were awesome! Staff were very nice. They have a dedicated menu.

The fish tacos are a must try. Delicious! Their tacos are served with corn tortillas. There are plenty of other options as well. The menu specifies what could be cross-contaminated (fryers, etc.) I also enjoyed the ambiance and decor of this indoor/outdoor restaurant.

Wife has Celiac and enjoyed the meal. Many menu choices. Nice decor

Has pretty large gluten free menu. Also indicates what has risk of cross contamination. They were very accommodating.

Excellent!! GF tortilla chips and an amazing GF menu. No other fried options other than the chips if sensitive or celiac, but a good array of other items to choose from. Can't wait to go back!!

Chef and server were knowledgeable and interested. They both went the extra mile to make sure there was no cross contamination.

Great menu with lots of options for gf and df dining. Fryer is not friendly. Had a small issue once because I was told my favorite entree, rum glazed pork, was df, but next visit was told there is butter in it. Explains how I felt and now I know. The salad with sweet potatoes, radishes and goat cheese (meat optional add-on) is great. Great cocktails, too!

The food was great but one star because I have gotten sick each of the three times I have eaten there. The second time we went the waitress told me the chips were fried separately so I ate some (after asking her is she was positive)..... Then the manager informed me that they were not. It was very upsetting. The manager was very helpful and gave us a gift card. We went back and I got sick again. I don't think their kitchen staff is properly trained on cross contamination. :-( It's a shame because the food selection is great!!