I felt very safe eating dinner there. The person making the reservation mentioned she was gluten sensitive and that I was celiac. The waiter identified us in our party and guided us to the gluten-free options and recommendations. Every time he went to place an order he would show us that he had placed ‘celiac’ on the order. They have a dedicated fryer and I highly recommend the Frites de Mer. They offer gf pasta and it was very good. Their butterscotch pudding was delectable. I understand the chef is gluten sensitive and it shows in the gf offerings

The gluten free bread was delicious!!

Previously had a great experience here two years ago, but came back for our anniversary and the service wasn’t as good, and despite me telling them I had celiac, I ended up glutened and in a lot of pain. Would not longer recommend. 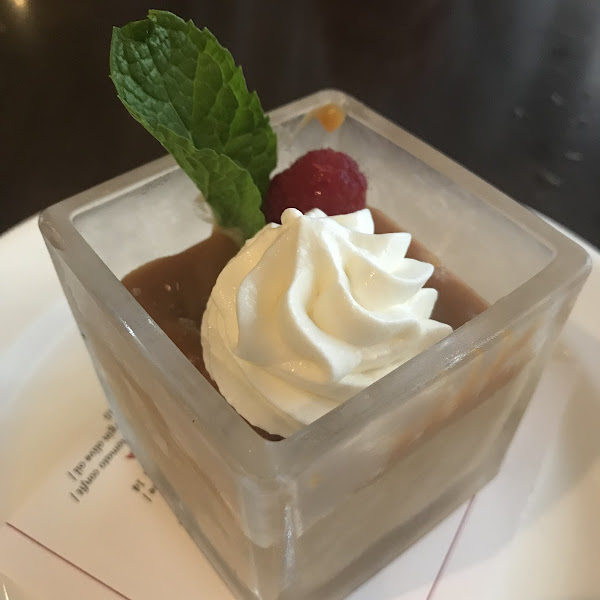 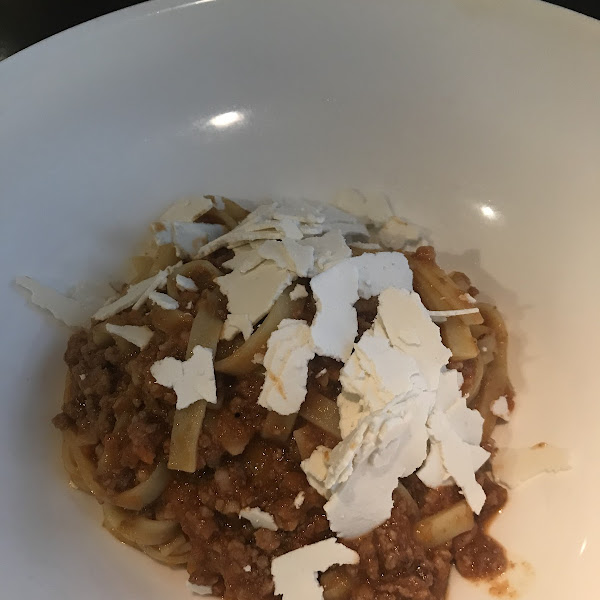 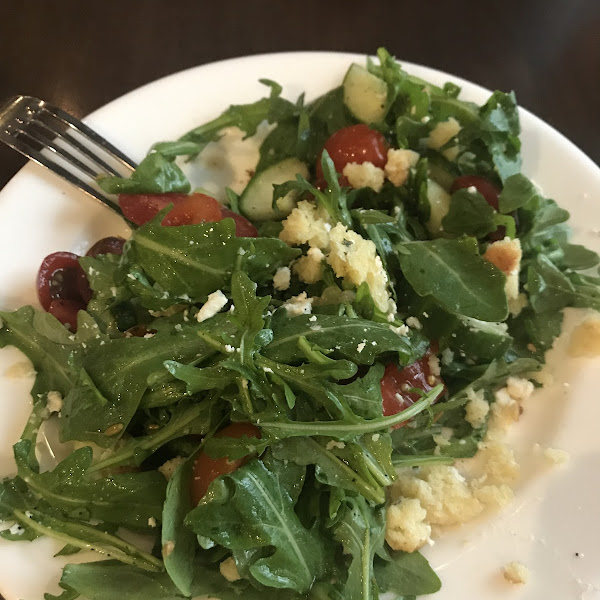 Delicious food and great service. They take extra care to make sure the GF options are safe to eat as well as delicious. I ordered the Brussels sprouts as an appetizer that my husband and I split. It was delicious! But my entree was outstanding: GF fettuccine with shrimp in a garlic cream sauce. My husband who does not have celiac tried some of my dish and loved it too. My husband ordered a swordfish dish with risotto that was a special and he said it was the best swordfish dish he’s ever had. Extra kudos for the chef stopping by our table to get feedback on how we liked our meal. I definitely recommend this restaurant!

In theory, this place should be great - has a GF menu, knowledgeable servers, and positive reviews. Ate lunch there for the first time last week, had the chicken salad and GF bread (tasteless and gritty), and got really sick. Still recovering from being glutened. Do not go here if you're celiac.

We loved our meal at Panzano, we went for happy hour and sat near the bar with our two kids. Andres was our waiter and was very kind and knowledgeable about gluten-free items And cross contamination. The pizza was delicious. We ordered so many small plates and they all tasted great.

Celiac and extremely sensitive to Cross contamination. This place was unbelievable. Staff was beyond accommodating, were knowledgeable, and took it seriously. It was the best Italian I’ve EVER eaten and my grandmas parents are from Italy. Butterscotch pudding was also ridiculous. Can’t recommend more. No sickness or symptoms at all.

The food is wonderful, and I haven't gotten sick here, but saw a couple of red flags last time I went. First, I had a brussel sprout dish that I've had before. This time, the waiter asked if I wanted it sauteed to prevent cross contamination. I said yes. I've had the same dish before without anyone mentioning the issue. The brussel sprouts were not nearly as food this time. I guess they are usually fried and I got lucky not getting sick last time. Also, they told me they screwed up my plate by putting bread on it and it would be coming later, but then it came really fast. That was suspicious. Have eaten here 3 times without getting sick, but don't think I would try it again.

Staff is very knowledgeable about Celiac (not just gluten free). They asked about allergies when I made the reservation, they have separate gluten free menus, and waitstaff was on it. When we ordered Brussels sprouts as an appetizer, they automatically prepared them unfried without my asking to avoid cross-contamination from the fryer. It is expensive and not what I would consider kid-friendly, but definitely somewhere I will go for nice work lunches again in the future. However, I do note another reviewer said they make their own bread and so cross contamination from airborne flower is a concern, so that’s definitely something worth calling and asking about for next time.

Homemade gf pizza crust was so much better than most. Knowledgeable staff asked if I was celiac and offered to discuss options. Several options

As someone mentioned, there is a large cross-contamination risk, especially near the bread station and bar. The first time I ate here, I did not get sick; the second time, yes, as it was much busier and they were clearly understaffed. While the staff is generally knowledgeable about celiac disease, the busier it gets, the more corners they cut. Avoid.

The staff was fantastic with knowing celiac and offering gluten free bread before entrees! This place is perfect and their pizza crust is delightful! Would go back every day if I could!

Waiter was extremely accommodating, and they have a gluten free menu. They have gluten free bread to pair with their excellent tapenade. When sending my order to the cooks you could hear the waiter yell "celiac!", so it was clear they have a plan in place for folks who can't handle gluten

I'm a celiac and did not react. We went for brunch and I had a salad with grilled chicken. Tested the meal and dressing with my nima sensor and it tested safe. They are very knowledgeable, just make sure to tell them you have celiac disease. Bread is made on site, but in a separate kitchen from where they made my meal. (gf bread and pizza is made in the same kitchen as normal bread though) Waiter advised not to eat the gluten free bread because of how it was stored.

Food was amazing but portions are very small considering the price - it felt like eating out in NYC! My husband & I shared the risotto dish & the short ribs. They do bake their own bread but it's in a different area from the main kitchen. I am very sensitive and had no issues.

People! They bake their own wheat bread! Flour stays airborne. Huge cross contamination risk! I cannot believe no one else has posted this previously

Sadly, I couldn't stay and eat there. I will say, though that the staff is amazing and honest about cross contamination risks. The food looked wonderful! I wish I could have stayed.

I stayed at the Kimpton Monaco, and came here for brunch. They have separate menus for each meal of the day, anything that might be put in a shared fryer is pan fried instead. I had a gluten free muffin (coconut chocolate chip), and the eggs Benedict with polenta. It was all amazing, and I felt very secure with their knowledge of celiac. The muffin was so good, my boyfriend was worried it contained gluten! I wanted to take some home with me, but the were out, so our waitress gave us free homemade gluten free focaccia bread. This restaurant is a must if you're in downtown Denver!

HIGHLY knowledge staff will bend over backwards to accommodate any and every allergy. Having Celiac, soy, and corn eating out can be scary. This place makes you feel totally at ease and safe to eat anything including breads and pasta dishes. While on the higher end of the price spectrum it is worth every dollar spent.

Margherita pizza was so yummy and it was a great atmosphere and very gluten friendly.

I went on restaurant week so my options were limited. I ordered the Caesar salad and asked if they would put some grilled chicken on it for me. They obliged and it was the best Caesar salad have ever had!

This is why I love this app, finding gems like Panzanos! They have a full gf menu, provide delicious gf bread while you wait for your meal, and the servers are very well informed. the food is great!

Absolutely amazing! I was recently diagnosed with Celiac's and kept reading about horror stories of restaurants not knowing what they're talking about when it came to gluten and cross-contamination. My waiter knew more than I did! He was telling me how a dish was changed so that it as gkuten free, their processes to ensure no cross-contamination, and more. He even asked it my table would like to share a gluten free bread basket instead. I'm glad he mentioned this as old habits might not have made me think twice before grabbing a piece. Wonderful experience, great food (if a bit pricy), and I'd recommend it.

I was being cheap and got a delicious arugula salad and a still pretty expensive turkey panini that was alright, but if you're willing to pay, their other dishes looked amazing. Waitstaff was friendly and knowledgeable and I did not get sick.

Fantastic breakfast. Get the eggs Benedict on polenta. Can't rave enough about this great place.

Hostess and waitress completely on top of it for gf. Extensive gf options. Delicious and healthy...we all felt well afterwards. In the Hotal Monaco. They surprised us with gf bread and tapenade. Dessert options too.

Had two great breakfasts here and they were so accommodating! They offer a GF muffin of the day and can make 2/3 of menu items GF. Our first server was amazingly knowledgable and offered to have my potatoes pan fried instead of deep fried to make sure they were safe. A chef brought my meal out to confirm. Second server was enthusiastic but said something about the oil being high enough temperature to "kill" the gluten, which I was skeptical of. Had a great GF continental breakfast though and was brought extra muffins at no charge. Would definitely recommend.

Went here with my husband for a special date night. It didn't disappoint!

While traveling in Denver Panzano popped up as GF so we checked it out. They had many GF options, our waiter was aware, it was nice, but... Traveler beware.. It's pretty foofoo- pricey. Ultimately we left because there was nothing on the menu suitable for picky kids

Best GF meal I've had in months. The Eggs Benedict and Prosciutto Pizza is out of this world!

This was the best meal I had ever had and included bread! No sacrifices for an amazing meal...fried Brussels sprouts, egg plant Parmesan, scallops with risotto and dessert. Just wish I lived in Denver...would make the snow bareable.

Yummy! - Dinner was great. Chef Elise does a great job offering items that can be made GF. I tried the Fried Brussel Sprouts and Scallops with Forbidden Rice. I skipped dessert but there were several options.