breakfast here was everything i’ve ever wanted as someone with celiac. our waiter was so friendly and the food was delicious. i would highly recommend.

We had the option to speak with the chef. The restaurant is NOT a buffet anymore. They brought us the gluten free bread and fruit plates. The MICKEY WAFFLES were excellent. They came with sausage patties, bacon, potato wedges and cheesy scrambled eggs. They also brought the chicken curry platter. All platters are family style.

We did the Character breakfast with the kids here on 2-14-2020. Our server was fantastic and we had a great time. The food we could eat was great and we didn't get sick, but I was hoping we'd get something special that was gluten free for my 5 year old who doesn't get treats that aren't homemade by me, so when I saw the reviews I was hoping we'd get some gluten free options other than Mickey waffles, which we'd already eaten for 5 days in a row. When I asked for a gluten free treat option we were brought a plate of prepackaged gluten free cookies. The chef did come out later, but I didn't really understand what he was asking, as I wasn't expecting him, and he ended up bringing another plate of the same cookies. The price was high, but the buffet was really nice for those that could eat most of the food and you're paying for the experience, which was so much fun! 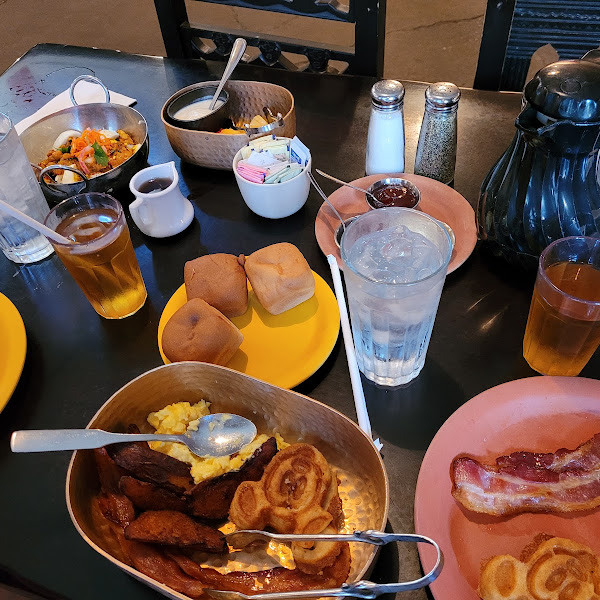 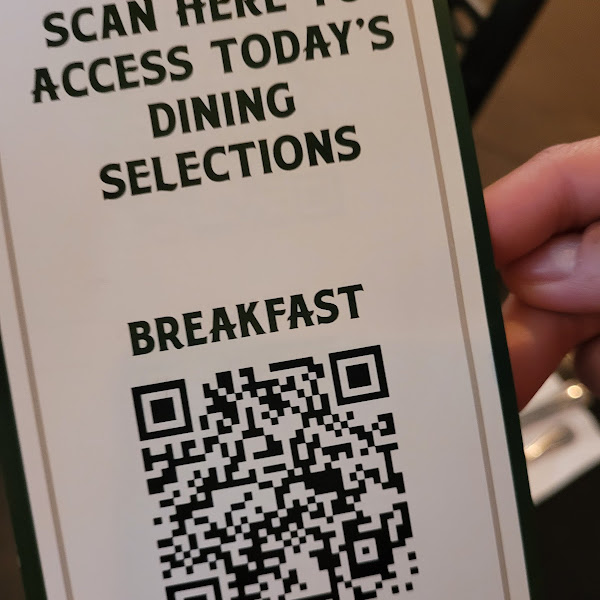 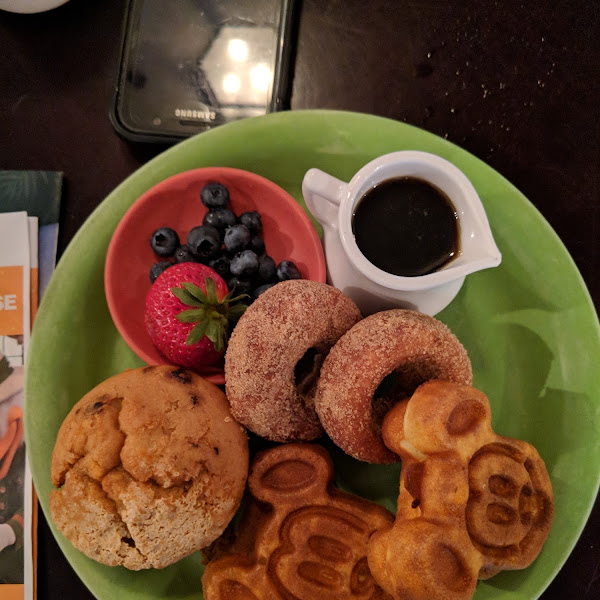 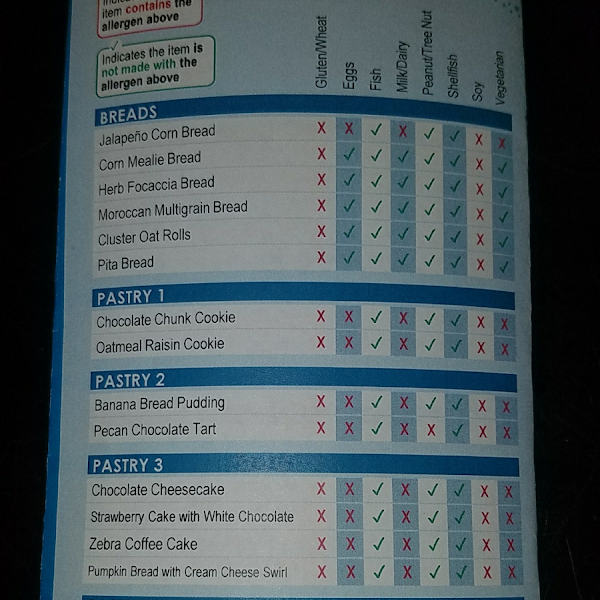 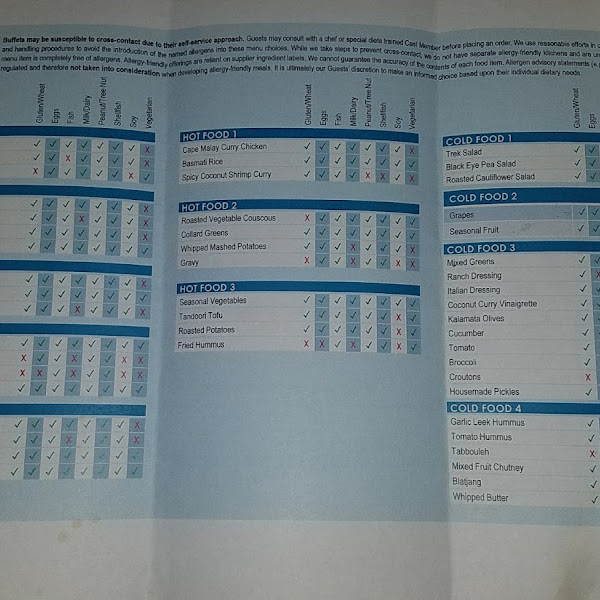 Amazing service here! Amazing food. The chef came out and took our order and checked on us four times. All of the food was incredible. We are grateful to have such amazing places to eat at Disney.

Very good food, it is buffet style so there is a risk of cross contamination, but I'm very sensitive and I had absolutely no issues. The chef came out and showed us personally what was safe and what was not, and even brought out some gluten free cookies for us that were not on the regular display!

Great breakfast! The server provided me with a flyer that told me what I could eat on the buffet. The chef prepared gluten free Mickey Mouse waffles and delivered them to my table!! It was a great experience!!

$52 per person for lunch is a bit much- having said that, the chef personally made and delivered whatever I asked for. Very sensitive, did not get sick. There’s even dessert!

The Chef was amazing! He came out to my table, brought me an extensive menu and spoke to me about my many, many options. Extremely knowledgeable in GF. I was guaranteed no cross contamination. I’m super sensitive and I never got sick!!!! It truly is a magical place!!! Thanks to the staff.

From the get-go, they get it. They handed me an allergen menu at the hostess stand. They have GF beer and they will bring you Enjoy Life cookies. Most of the items on the buffet are GF and our waitress was amazingly knowledgeable. Worth every penny - and at Disney, that can be substantial.

AMAZING! the waiter immediately knew my allergy before pouring drinks and got the chef to make Mickey waffles. When the chef arrived, I got Mickey waffles but also cinnamon sugar donuts, blueberry muffins, fruit, and syrup. Amazing experience and felt like a normal person enjoying a meal with my fiance. Expensive but worth it.

Had brunch here. They give you a brochure telling you what is safe on the buffet and you just have to ask for GF Mickey Waffles and the chef will make them in the back.

Buffet restaurant. Had tons of choices and even had a list he could carry with him up to the buffet to make sure he was making gf choices. The chefs behind the buffets made sure people were not cross contaminating the serving utensils. Best part was when we asked for only gf option on buffet for dessert and chef brought out his own plate from back to ensure safety.

My friends and I tried the breakfast buffet. We loved it. We had fun meeting the characters. A bit expensive for breakfast.

Chef came right to table and walked us through buffet then made Mickey waffles and chocolate muffin from kitchen. Still Our all time favorite breakfast at WDW.

Loved my lunch here. A chef walked me around the buffet and answers all of my questions. I was surprised how many GF options they had. One of my favorite GF meals on my trip.

We went for a late breakfast, and would up with some breakfast and some lunch. I felt weird asking to be shown around the buffet a second time, but they were very accommodating. The food was very good. All your usual Disney buffet stuff, plus some interesting African inspired dishes and a few curries. Characters come around for pictures.

My family went for the dinner with the characters. The chef came out and walked me through the buffet. I could eat almost everything at the buffet. There was even a great non flour dessert.

lots of gluten free options! Good food. The chef comes out and shows you what is safe and what isn't. the waitress was very nice and my kids loved meeting mickey, goofy, donald, and daisy. it was my daughters birthday and they brought her a cupcake with a candle and a card signed by the characters. the 2 gf desserts were awesome!!!

Gluten & dairy free options are plentiful on this buffet. The tour with the chef makes it easy to ask any questions. They had 2 tasty gluten free desserts also.

Awesome! Chef came to my table and invited me on a tour of the buffet where he walked me up to each item and said GF or not. He also warned me of the fact that the tofu they had out that day was in a shared fryer. Excellent accommodations!

Not only did the chef walk me around and show me all the gluten-free food on the buffet, but at the end they brought me a plate of gluten-free desserts.

Chef was awesome. Had GF donuts, muffins, and bagels for breakfast on the buffet in their own section

Chef walked us through the buffet and even brought GF muffins. Definitely our favorite buffet at Disney.

It's a buffet... and I know buffets can be sketchy when you're gluten free, but I love Ethnic food and there was no way I was passing up this African delight and the chance to eat food here! The chef walked me through the buffet and told me what I could and could not eat. Most of the items were gluten free (I also have a soy intolerance though so there were a few more items I had to stay away from). The chef was amazing though, he felt so bad I couldn't eat the desserts (because of the soy) that he gave me 5 packs of Enjoy Life cookies to enjoy later and went out to find me a fruity pop haha. Food is delicious, so many options and so many different flavors. I was stuffed when I left, not to mention, I didn't get sick!!!