Gf pizza, only one where I don’t get sick.

I never eat out. But I figured I would give the Kenwood larosas a shot since they claim they make the pizza in a separate room. I went in just to check becuase I remember they lied a few years ago and I hoped things had changed... Nope still lying. I called last week they said separate room.... Go in to order becuase if my trust issue from the past and they again say "seperate room." So I'm sitting there looked at my phone for a bit andlook up and my gluten free pizza is on a pan coming from the main kitchen to the room behind the counter. This is the same behavior I noticed in the past and this is what I think is happening. They prep the pizza and ingredients behind the counter, pizza is in a disposable pan. They put toppings on and then put the disposable pan onto an actual pan and run it from the main oven. I didn't feel like getting confrontational, but I am going to call corporate and lay into them. It is completely messed up to tell people it's made in a separate room and then not actually do that. Last time I trust a restaurant. I will be complaining to their corporate and the company that have them a training certificate for this.

Yum. They were very very concerned and careful, and mentioned they have separate spaces for preparing the G free stuff. The crust wasn’t so great (good on the edges where it was cooked thoroughly though) but the toppings were delicious, so so good. I like this place

I had a GF cheese pizza and did not get sick. I’m not 100% positive but I did read reviews on another website that they use a separate oven.

Great gluten free pizza. Dedicated kitchen. Separate oven. I have had it many, many times and never gotten sick. Love it!

They no longer have GF pizza crust at the Colerain Stonecreek Towne Centre. They sold me a regular hand tossed crust (carry-out). Went back later and manager apologized and refunded my money

Only gf item was pizza. We ordered one and salad with request for changed gloves. No issues and manager supervised prep.

Have eaten pizza here many years with no issue, but this year I got violently ill from GF pizza. So sick that I could not travel home. I will never eat there again.

Ordered the GF crust for my daughter in law and the regular for the rest of us. Toppings were fine, but crusts themselves (both GF and regular) were not very good. Odd texture for pizza crust, kind of doughy. I’d try other options before doing LaRosa’s again for GF pizza.

The first gluten free pizza was brought to the table in the standard foil pan. The pan was on another tray that had toppings and crumbs from another pizza. We asked for a new pizza to be made. My son was sick an hour after leaving the restaurant.

Delicious and safe!! They are celiac sprue certified so rest assured! They go through every precaution to insure safety and avoid cross contamination. But aside from the it was DELICIOUS!!! I will definitely return when in town!

In addition to being Celiac, I also have dairy sensitivity and an following a therapeutic ketogenic diet. When my employer chose to cater a lunch from LaRosa's I checked out their GF menu, and was surprised it ONLY contained pizza, which I can't eat because of the carb content. I called the store and talked with the manager and asked if their salads were gluten-free and he responded that they were not and the only gluten-free item they had on their menu was their pizza. I found that very odd that they were unable to make a GF salad, but I think that tells a lot about their kitchen practices.

Every time I call or go there they never let me order the gluten free item I want. There is nothing in the garlic butter sauce, but they always tell me it's not gluten free. It's a waste of energy talking to them

They did a great job- salad was great and check dressing for me as well some other items! Very friendly!!! Pizza was very good!

NOT for anyone who is extremely sensitive!! I ordered the gluten free pizza from this location a few days ago and have been sick ever since! Hives and stomach cramps and so much more! Ugh! I was hoping I was finally going to be able to enjoy my hometown pizzeria but, alas, it is not so! :(

This pizza is AMAZING! It is also priced like a normal pizza which is awesome because gluten free pizza is normally expensive. The staff is knowledgable and even gave me a special gluten free pizza box that wasn't in the prep area for other pizza. I had a friend with a nut allergy with me and she also ate with ease.

Awesome Larosas Pizza. Even better you can get the medium GF pizza as the second $7 pizza to most orders. Get one topping with double cheese and you are in heaven!!

Dedicated kitchen. Eaten in and carried out; never gotten sick. My go to for pizza. (I just wish they had other GF items on their menu.)

One of our favorite GF pizzas. 100% safe for celiacs as they have a separate prep area and separate equipment. Only a trained manager can make the GF pizza.

Pizza was terrible, won't be back. They do a great job telling you all the ingredients, give you a plastic pizza cutter and they keep the boxes in a container away from the other food to prevent cross contamination.

Decent crust and toppings. They do make it separate from the regular pizza and add a notice that they could have possible cross contamination, but they are much more careful than many others we've encountered.

The pizza is ok, nothing fabulous.

By FAR the best GF pizza in the area! Some branches have it and some don't (you can also get it at Beechmont), and our servers knew all about cross-contamination dangers when we asked about the possibility of eating the fries (which are apparently not harmful in small doses). If you're gluten-free and like pizza, this has to be at the top of your list.

GF Pizza dough arrives at Larosas chains pre packaged in individual medium sized pans (this is why only medium size is available). There is no handling of the dough & no shared pans (yay!). Toppings are added and run thru the oven with other pizzas so there is a chance of cross contamination. That being said, I've ordered pizza from the Beechmont location 3-4 times and have had no issues! I am very sensitive and selective about where I eat. When you place your order make sure you tell the person taking the order about your sensitivity (I explain that I'm celiac, need the manager to be made aware, and need folks to change gloves and take extra precautions when handling my pizza). Never had a problem and.... IT TASTES LIKE LAROSA'S!! What I remember it tastes like anyway... ;) Only wish Hyde Park location had GF option. Oh....to have pizza delivered again.....

Had a great gluten-free pizza here. Their crust and sauce do not contain dairy and the menu highlights gluten-free toppings. The pizza is big enough for one hungry person or could be split for lighter appetites. Their restaurant is GREAT kitchens accredited by the National Foundation for Celiac Awareness. Read my full review at http://www.eatingoutwithout.com/2014/07/side-trip-larosas-pizza-review-and.html

This location specifically does a great job with proper handling and baking. Medium is the only GF size but you can usually find good coupons for 3 mediums and there is no extra cost for GF. Boxes are well marked as GF and sealed. Easy to order online and the non-GF toppings cannot be selected.

Ordered pizza for carry out. Pizza was cooked in its own disposable pan, the pan was placed directly in the box so it was not transferred with other utensils. The box was sealed shut by a GFree sticker. Pizza tasted very much like their regular pizza!! (Diagnosed only 1 year ago, memory of regular pizza is pretty fresh..) I ate my GF pizza in silence simply to savor every bite!! And I didn't get sick!!! Thank you Larosa's for doing it right! You made this celiac very VERY happy!!

GF pizza is cooked on and comes out on a foil pan for safe prep. Crust was tasty and the medium GF pizza was the same price as a "regular" medium, which is rare. I wish an individual size was available, and a GF dessert. It fulfilled my LaRosa's craving.

The gluten free pizza comes on its own tray so not to contaminate it.

Non-celiac, but very sensitive to gluten. We have had their GF pizza many times now with good results. As an added bonus, it is the same price as a medium pizza and all coupons still apply to the GF variety.

LaRosa's GF pizza is great. It is a thin rice crust and they charge the same as a medium. Just make sure the toppings you choose are marked GF on the menu.

Best gluten free pizza I have had. I hope to see them expand their gluten free option to their other locations. Right now this is the only one.

Have been to several times for gluten free pizza. large selection of gluten free toppings. Bigger GF pizza than most at a reasonable price.

Amazing. The Anderson location has always been wonderful. My son gas never had a reaction to the pizza and he will react to any little bit of gluten. The staff is great and the food is delicious!

GF pizza that tastes just like "normal pizza". Prepared and cooked separate from other foods. They are so aware of cross contamination they do not give you a plastic server for the pizza. GF beer also (bards).

The gluten free pizza crust is good. Sauce and toppings are the same as their other pizzas. A good choice for pizza night.

Traveling to Cincinnati and happened to fine la Rosa's. We had an amazing dinner gluten free pizza. Service was better than most. I highly recommend their pizza if you have the opportunity to go. Very reasonably priced. 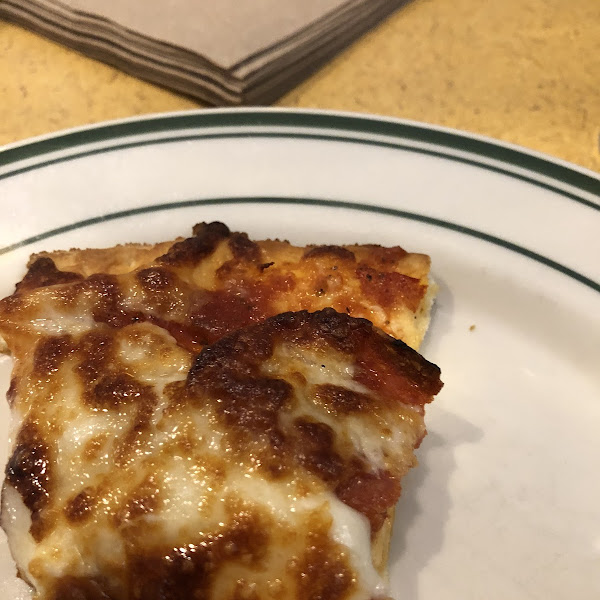